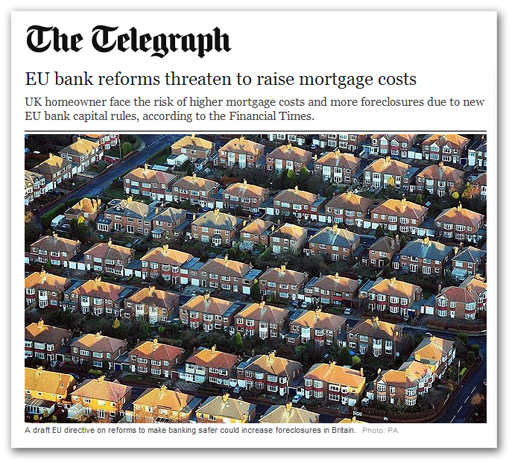 Up front are the Failygraph and the Daily Mail. They are complaining about "a draft directive of reforms to make banking safer and rules more uniform", the effect of which is to bring forward mortgage foreclosure proceedings from 180 days in the UK to 90 days.

It takes the Financial Times, however, to identify the legislation involved. It appears we are dealing with the capital requirements directive (CRD 4) "package", which aims "to improve bank safety by making it easier for investors to compare them and allow regulators to impose uniform capital requirements".

The specific proposal (one of several) was actually published in July last year, running to 154 pages, accompanied by a working paper, running to 226 pages, the proposed directive going under the fearsome title of:

This is scheduled to go to the EU parliament committee in April and for its first reading in June, possibly to come into EU law by the end of the year.

But it is the documents which give the game away, telling us that the package implements the international Basel accord on banking supervision, the so-called Basel III agreement. The key objective of the proposal, we are told:


… is to address the shortcomings exposed during the financial crisis, to move towards a single rulebook regulating credit institutions in order to prevent recent problems from reoccurring in the future, and to ensure that risks linked to the issues of financial instability and pro-cyclicality are more effectively contained.

Unsaid is that many of those "shortcomings" were in the Basel II agreement, but the point relevant to this current rush of publicity is that we are not dealing primarily with EU law.

What we have here is an example of global government, about which we have written previously, specifically the secretive Bank for International Settlements in Basel, which hosts the equally secretive Basel Committee on Banking Supervision.

It is this body - in which our own Bank of England governor, Mervyn King, plays a central role – which actually makes the rules. The members of the key sub-committees are not disclosed, the meeting are in private, the rules of procedure are not declared and the voting record is secret. By comparison, the EU is a model of transparency – except of course, that the EU is a major player in this committee, where the real power is held.

This situation, therefore, casts the EU in the role of middle man. It takes the "recommendations" from the Basel committee and processes them into actionable legislation – some as commission regulations and some as directives, for the member states to adopt into their own legislative codes.

The one thing the EU cannot do, however, is make any substantive changes. The rules have been decided on a global scale and the EU is now just the regional authority implementing them – a relationship not dissimilar to that between the EU and the IMO.

In this context, to blame the EU for the result is, to say the very least, otiose. But that is what the media does when it suits it. Possibly, the real reason though is that, like our own MPs and so many others, they no longer have a very clear idea of how we are governed or who actually governs us.

Fortified by their own ignorance, the hacks thus go for the easy shot – and none of us are better informed. Small wonder though that the powers that be are thinking of selling off the Houses of Parliament. If they do, there is certainly no need to replace them.