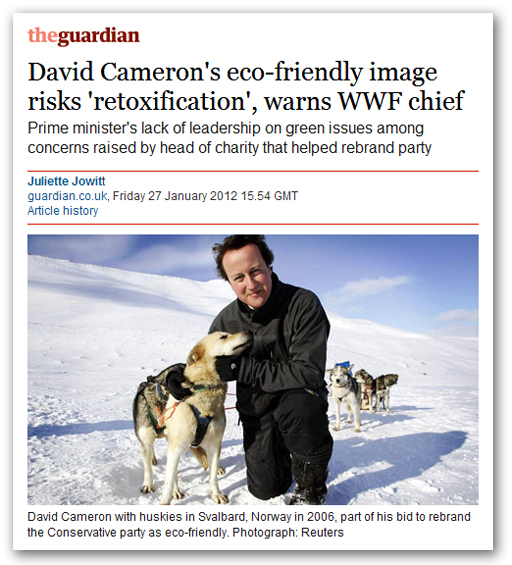 When you have the head of the UK branch of the WWF complaining to The Guardian about The Boy's lack of leadership on environmental issues, things have come to a pretty pass.

It was the WWF which helped set up the Boy's photo-opportunity in Norway, where we was seen cuddling a husky as "part of his bid to rebrand the Conservative Party as eco-friendly". And now that same organisation must be feeling rather left out as, one after another, the green schemes are dropped.

What is particularly interesting here though is that, of all his voter-friendly initiatives, his husky stunt was probably the most genuine. Insofar as he believes in anything, The Boy actually believes in greenery, and he was not (at the time) taking WWF for a ride.

As times change, though, The Boy changes. He is in office and wants to stay there, enjoying its fruits. And if that means ditching the very few principles he has ever held, then that is evidently a small price to pay. If I was Cameron's grandmother, I'd be very afraid.