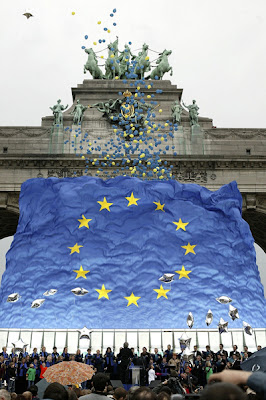 "If you misdiagnose the problem", writes Jeremy Warner, "you are highly likely to prescribe the wrong sort of treatment".

The corollary also applies. In order successfully to solve a problem, you must first diagnose it correctly. Warner has "thought long and hard" about this, about "why Europe should be so bone-headed about the crisis it faces". And he still is nowhere near getting there.

Unsurprisingly, for the chattering classes, he started off on the wrong foot, telling us that "it was tempting to put these failings down to want of intellectual vigour".

Economics, goes the old [lame] joke, is not rocket science; if it was the Germans would be much better at it. "But actually", says Warner, " there are some very fine German economists all of whom fully understand the nature of the problem".

Hence in Warner's book, the problem is worse than that. "What it's really about", he opines, "is refusal to face up to the truth – that monetary union, the imagined crowning glory of the European project, cannot work under the present framework or anywhere close".

"Europe's leaders don't want to hear this", he adds. "They still cling to the belief that monetary union of fiscally sovereign nations can, provided everyone sticks to fiscal disciplines, be made a functioning and transformational engine of growth".

You might have thought he could do better than this. The problem, after all, is very simple. The euro is not an economic but a political project, and the "colleagues" are reacting in a political manner rather than taking the appropriate economic measures.

Their stance is that "the euro must survive", whence they dig their heels in and refuse to budge. They refuse to take the obvious and necessary economic measures because they are at odds with the political objectives.

They themselves cling to the belief that the European Union is primarily an economic project, which has somehow gone off the rails, and only needs some economic correctives to bring it back on track. And that "refusal to face up to the truth" is what dooms them. If you start off from the wrong premise, you will always struggle to make a correct diagnosis.