They cannot have it both ways 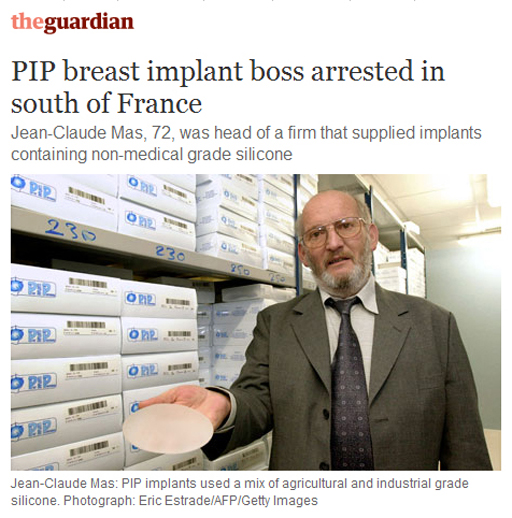 Jean-Claude Mas, 72, founder of Poly Implant Prothese (PIP), has been arrested at the home of his partner in Six-Fours in the Var, south of France. He was taken into police custody just before 7am this morning. The house was being searched by investigators. A deputy chief executive was also arrested at his home.

So we have the likelihood of criminal charges being preferred against this (French) man, for the sale of substandard goods, purporting to conform with the highest of EU standards, under the aegis of the French government.

Since the products carried the CE marking, attesting that they had been produced in conformity with EU standards, underwritten by the French and British governments, in what way should the clinics which fitted them now be liable for replacing them?

Further, since the UK complied with EU law in this instance, and accepted the provenance of the CE marking – as it is obliged to do – in what way should the British taxpayer be liable for remedying for what, on the face of it, is a series of criminal acts, and a regulatory failure?

And herein lies an important point of principle. If the regulators, in whole or part, dictate the means by which a product should be considered marketable, and then underwrite a marking scheme that attests to quality and safety, with that comes responsibility when things go wrong.

They cannot have it both ways – dictating and monitoring standards, requiring a compulsory marking which attests to conformity, then walking away when their system fails. With power comes responsibility.