A dereliction of duty 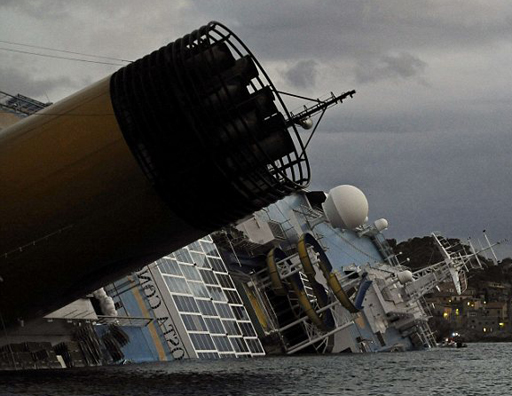 Despite the reassurances from the egregious Janet Archer, and others, on the safety of large cruise liners in the wake of the capsize of the Costa Concordia, the design of this ship - and those like it - is probably unsafe.

This was the finding of EU-funded research into the effect of collision damage, carried out in Glasgow and Strathclyde universities nearly a decade ago. It tested three then current cruise ship designs, all of which complied with current regulations. In the research, 33 damage scenarios were tested, and in 16 cases the vessels capsized within two hours, sometimes rapidly.

In particular, a newly discovered phenomenon was tested, known as the multiple free surface (MFS) effect, where traditional calculation and testing cannot adequately describe the behaviour (and hence the destiny) of a damaged ship.

This is particularly a problem in cruise ships, which have complex watertight subdivision of internal spaces, a phenomenon which "substantially weakens or indeed leads to complete erosion of stability at any of the stages of flooding".

There is also the issue of so-called transient flooding. This has been described as a "mechanism of capsize" relevant to ships with complex watertight subdivision such as cruise ships:


As the hull is breached, water may rush through various compartments at different levels, substantially reducing stability even when the floodwater amount is relatively small. As a result the ship could heel to large angles, even for small damage openings, letting water into the upper decks that spreads rapidly through these spaces and may lead to rapid capsize.

Those questioning the stability of giant cruise ships such Costa Concordia are, therefore, missing the point. The issue is not stability, per se, but post-collision stability.

One of the latest into the general fray is Sky News, but it too is emollient. It cites Robert Ashdown, the European Cruise Council's technical, environment and operations director, who dismisses concerns saying cruise liners are "more stable than they have ever been".

"They can stand up to anything the weather can throw at them. They are designed to strict international standards," he says. In this, Ashdown is probably right, but what he projects is only part of the story - he is talking about the stability of the intact ship.

As to his reference to "strict international standards", he does not spell these out in detail. They do, however, encompass EU law, namely Directive 2009/45/EC of 6 May 2009 on safety rules and standards for passenger ships. Despite the closing comment in my earlier piece, ship safety is already an EU competence, with the EU commission also implementing international standards - in this case IMO (International Maritime Organisation) Assembly Resolution A.749(18) of 4 November 1993, as amended.

What is immediately striking about the EU law and the IMO standards is their relative age, the core IMO standard going back to 1993. And even the date of the EU's 2009 Directive is misleading. It is basically a recast of the Council Directive 98/18/EC of 17 March 1998.

Nothing in these standards, therefore, reflects the work on multiple free surface effect, or transient flooding, either of which could have been responsible for the Costa Concordia capsize, explaining why the ship listed away from the damaged side. Thus, the authors of the ground breaking British research describe the regulatory system as "stretched to breaking point".

However, despite the EU commission displaying a keen interest in safety at sea, its 2007 review ignored its own funded research, in producing the 2009 amended directive.

Further, a EU-funded Passenger Ship Safety Legislative Review, produced by the Milan consultancy Grimaldi e Associati and published in April 2011 fails in any way to address the damage survivability of cruise ships, dealing only with cruises engaged in polar areas.

Nor indeed are international standards bodies addressing the issue. The International Maritime Organisation is focusing on the so-called "return to port" philosophy as its primary safety paradigm.

It believes that the regulatory framework should place more emphasis on the prevention of a casualty from occurring in the first place and that future passenger ships should be designed for improved survivability so that, in the event of a casualty, persons can stay safely on board as the ship proceeds to port.

Such a philosophy is hardly going to work if, as we have seen with the Costa Concordia, the ship capsizes shortly after a collision. Yet, with neither the EU nor the IMO showing any signs of dealing with this phenomena which render current regulatory requirements inadequate, we can have no confidence that a repeat of the Costa Concordia incident will not occur some time in the future.

Thus, while the current focus is on Capatian Francesco Schettino and his dereliction of duty, perhaps more questions should be asked about why this relatively modern ship capsized, and about the regulators' dereliction of duty – why they have ignored post-collision stability problems in large cruise ships.