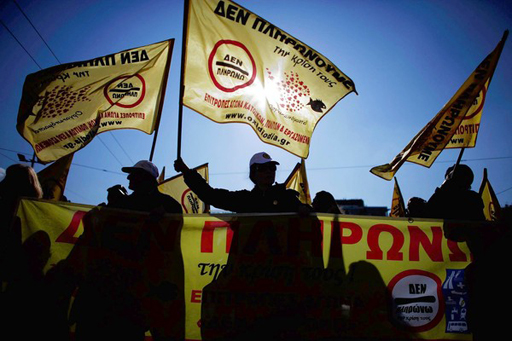 Today is the day for the Greeks, as the meetings with private bondholders resume. And to celebrate the event, thousands of protesters are on the march in Athens, although the LA Times, for one, isn't getting terribly excited about this. According to the Grauniad, today will be the second day of protests, with strikers out in the streets.

But, rather than another day of precipice-hanging, some experts are saying that we will have to wait until March for Greece to default – if ever.

Meanwhile, a potentially more harmful (in the short-term) situation is developing in Hungary, with the EU commission launching legal action against the Fidesz government for violations of European Union treaty law and "erosion of democracy". One gets the impression that if the commission had troops they would at this moment be marching across the border.

Maybe, though, three out of 27 countries on the March isn't much to shout about, which is probably why the British media is playing the disruption low-key. When all 27 start, maybe they will take notice – and just report the British end, if I know anything.
.
COMMENT THREAD
Posted by Richard at 14:12