This snow is not happening 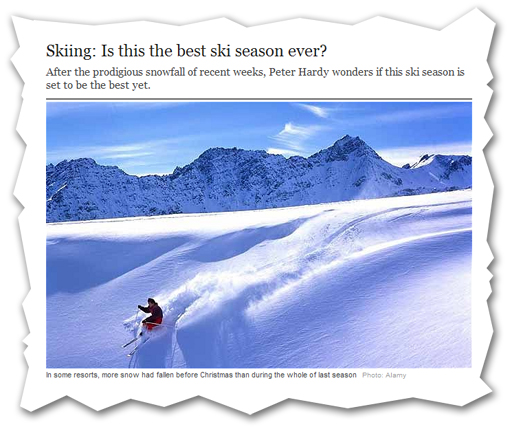 Peter Hardy in the Failygraph reports that, shortly after 7am on December 16, the pisteur charged with measuring the snowfall at the permanent weather station just above Courchevel 1850 shook his head in astonishment. Then he crouched down on the edge of the piste to check and recheck the figures.

"It couldn't be true, but it was", Hardy writes. "In just 10 pre-Christmas days more snow had fallen in the Trois Vallées than during the whole of last season. At other resorts across the Alps an avalanche of similar records has since tumbled – and still the snow has continued to fall in prodigious quantities". 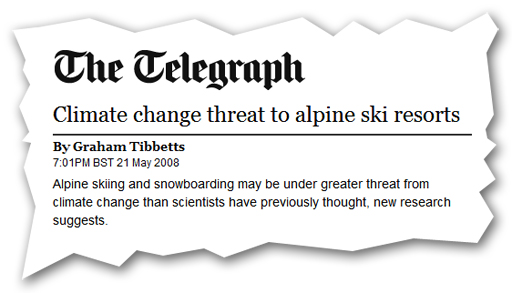 But, of course, it can't be true. On 21 May 2008, the same Failygraph reported on a study of snowfall spanning 60 years, which had indicated that the Alps's entire winter sports industry could grind to a halt through lack of snow.

The study, reported in the New Scientist magazine found a dramatic "step-like" drop in snowfall at the end of the 1980s which has never recovered. The average number of snow days over the last 20 winters was lower than at any time since records began more than 100 years ago.

"In some years the amount that fell was 60 percent lower than was typical in the early 1980s", said Christoph Marty, from the Swiss Federal Institute for Snow and Avalanche Research in Davos, who analysed the records. "I don't believe we will see the kind of snow conditions we have experienced in past decades," he added.

And how can a scientist from the Swiss Federal Institute for Snow and Avalanche Research be wrong? Our modern-day the pisteur must be dreaming. This is a collective delusion.