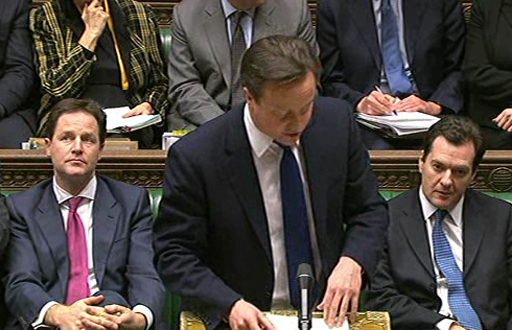 When I checked the business for the day on the parliamentary website, there was no reference to a statement on the European Council meeting. With a number of newspaper sites also reporting that there would be a statement "tomorrow", I have misled myself and others into thinking the statement would be tomorrow. However, the statement was today, at just after 3.30pm, and is now up on the No 10 site.

True to form, we are told by The Boy that, "I went to the Council last December prepared to agree a treaty of all 27 countries but only if there were proper safeguards for Britain". He then tells us, to the raucous cheers of the MPs: "But I did not get those safeguards. So I vetoed the Treaty".


As a result Eurozone countries and others are now making separate arrangements outside the EU treaties for strengthening budgetary discipline, including ensuring there are much tougher rules on deficits. So at this Council 25 EU Member States agreed a new Treaty outside of the EU. Britain and the Czech Republic have not signed up. And we will not be taking part.

So, as we saw last night, The Boy is directly claiming to have "vetoed the Treaty".

There is no equivocation or qualification here but, in order for him to have "vetoed the Treaty", there must have been a treaty to veto. Further, as we know, a veto can only be exercised within the context of an IGC. A European Council acts by simple majority.

We know, however, that there was no IGC convened, and as the government's own spokesman tells us, "There was … no text of a Treaty which was vetoed; it was rather the process of amending the European Union Treaties to this end which was vetoed".

By any measure, The Boy is misleading the House, even without taking into account the spokesman's error, whereby a process cannot be vetoed. Have we got to the final stage in the deterioration of Parliament, where a man purporting to be a prime minister can make things up as he goes along?