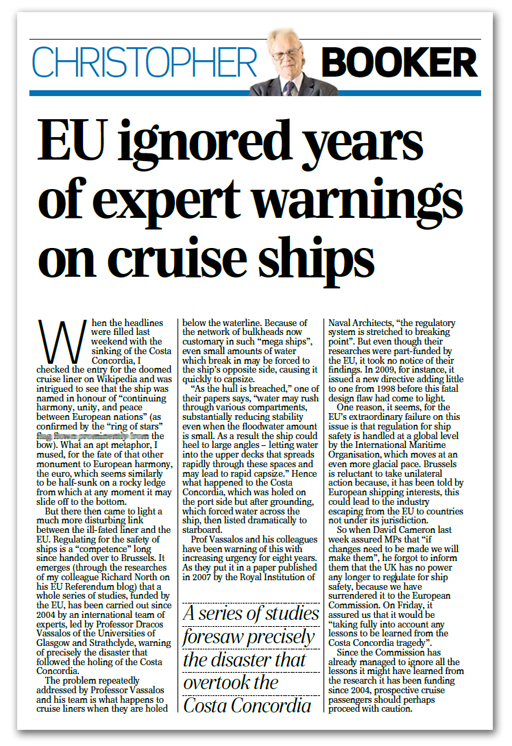 The column takes a look at the Concordia capsize, picking up the EU element that we raised on this blog. His piece took account of this narrative on the ship's last-known movements, and explores some of the issues I raise in this piece.

Without having to speculate on the causes of this incident, it is possible to make the perfectly valid point that the sequence of events which led directly to the capsize is distinct from the sequence that led to the collision – and that the capsize was not necessarily an inevitable consequence of the hull rupture.

Here, it is necessary to make the distinction between "intact stability" and "damage stability", and it is also possible to assert with confidence that current legislation (EU and IMO) does not fully take into account (or at all) of the phenomena of multiple free surface effect and "transient flooding" in large cruise liners, which can play a significant part in causing ships to capsize.

It is thus valid to question whether the regulatory regime was (and is) adequate to deal with potential risks, and to ask whether the perceived inadequacies were in any way responsible for the capsize of the Concordia.

In most of such incidents, cause is quite often multi-factoral, in which context responsibility (and blame) must often rest on many shoulders. It would be a shame if the emphasis on the apparent failures of the ship's captain obscured any failings of the regulators, and allowed them to escape any blame that should otherwise accrue to them.