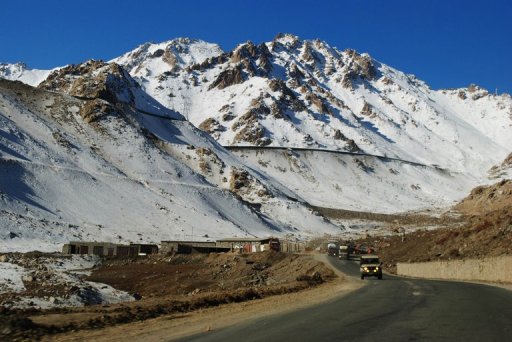 The report refers to Afghanistan, where heavy snow and avalanches have killed at least 16 people in mountainous north-east, leaving dozens more trapped in their homes.

A week of heavy snowfall cut off main roads in remote Badakhshan province, making it difficult for rescue workers to reach affected villages. "So far 16 people have been killed as a result of heavy snow and avalanches in at least six districts of Badakhshan," provincial spokesman Abdul Mahroof Rasikh told AFP.

Twelve districts remain unreachable, but rescue teams made it to Ishkashim district where around 70 families are still trapped under snow, he added.

And now for the money quotes: "Heavy snowfall and avalanches kill scores of people in Afghanistan each winter ... In 2010, avalanches killed more than 150 people in the high-altitude Salang pass through the Hindu Kush mountain range that connects Kabul to the north".

In Kashmir also, five people are reported killed in Arctic conditions, with temperatures recorded as the lowest for 16 years. This, though, pales into insignificance compared with the reports from New Delhi, home of Rajendra Pachauri.

From there, we are told that North India is reeling under intense cold wave condition that has led to more than 140 deaths across the region. The national capital region of Delhi is under a spell of cold wave with the minimum hovering around 5 degree Celsius on Tuesday morning.

Some of these areas have seen their first snowfall for 60 years, yet in no instance do we see the warmists complaining. They are only interested in death by global warming. Death by freezing is of no importance.