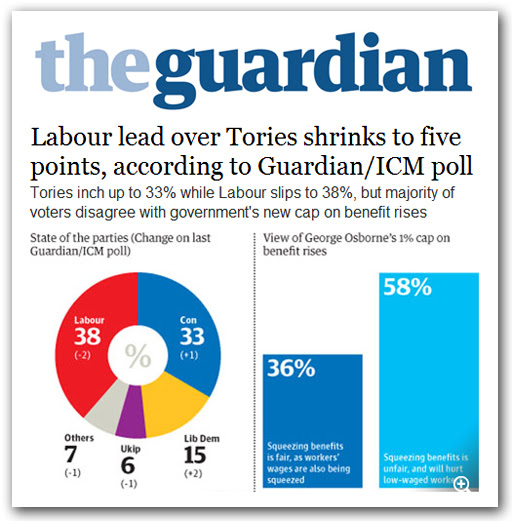 At the end of a fortnight in which international affairs have moved centre stage, says the loss-making Guardian, David Cameron has clawed back ground from Labour. Its lead has been squeezed to five points, after three straight months in which the gap in the polling series has been a solid eight points.
One factor may be the Algerian hostage crisis, which has shifted attention towards terrorism and relations with the Muslim world, but the polling period has also seen the European Union climb up the political agenda, with a promise of a referendum in the offing.
It has been an article of faith in contemporary politics that a high-profile "Europe" is bad for the Conservatives, but this may be changing. And a straw in the wind may be the UKIP vote, down one point to six percent, and trailing well behind the Lib-Dems, who come in at fifteen percent.

It is early days but this could well indicate that the Conservatives could gain a real electoral dividend from a firm statement on a referendum.

Any sign that Mr Cameron's stance is changing the electoral calculus will, of course, have an impact on Labour. While Ed Miliband has been gyrating through his own, rather inelegant dance of the seven veils, if there are votes to be gained from a referendum promise, the Labour leader will follow.

Should this happen, we could see the 1997 scenario, where both sides go into the election campaign with an offer of a referendum. By such means, they hope to neutralise "Europe", drowning out UKIP's voice in a torrent of domestic issues.

UKIP is trying to compensate by ramping up the immigration issue, but it seems poised to make the tactical error, over-blowing the scare tactics. This can work in the very short-term, but in a prolonged campaign, it rarely works – as we will see with the euro-FUD.

If Cameron comes up with a credible referendum promise, people who are committed to decoupling from EU political integration will most probably see the Conservatives as their best hope. Support for UKIP at the general election will wither on the vine.

At the euro-elections next year, the calculus may be different. A vote for UKIP could bring the party extra resources with which to fight a referendum campaign, and people may still be prepared to give the party a punt. But, with the lacklustre performance of the party, which has yet to offer a credible exit plan, even this might be a vain hope.

If UKIP is to stay in the game, it could make a start by coming up with a serious policy on "Europe", which means developing a credible policy for a post-EU Britain. There, it has one advantage, in that Cameron's renegotiation policy lacks credibility.

As time passes and meaningful negotiations do not materialise, UKIP shoiuld be able to gain strength from the uncertainty, but only if it is able to offer a realistic alternative vision.

Tomorrow, therefore, many be a turning point for Mr Cameron, but it could also be prove to be the high tide for UKIP. This is a party that has to decide whether it wants to survive, or whether it is going to allow its support to drain away. For it, the signs do not look good.