EU politics: between a rock and a hard place 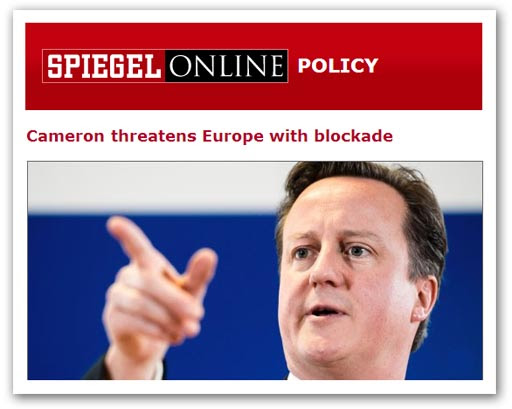 The German press has picked up the interview of David Cameron on the Andrew Marr show. They see as "blackmail" Cameron arguing that he is "entitled" to use the threat of a veto to get his repatriation agenda accepted.Thus does Spiegel emerge, with not one but two pieces,. The first (headline illustrated above) has Cameron threatening a "blockade" while the second suggests that he is driven by "EU-haters".The magazine sums up his contribution by stating that his ploy to block the integration of the eurozone unless the UK was exempted from some EU laws, "sounded almost like blackmail".That the prime minister is under great pressure is not denied, with attention drawn to the impact of UKIP. Even this weekend, it was predicted that this party could cost the Conservatives 50 seats in the general election, ensuring a victory for Ed Miliband. However, Spiegel is adamant that that blackmail is not going to work. The "colleagues" would rather work round the margins than give into him. Already they have the fiscal pact, and that was achieved without his consent. It is admitted that the German government from time to time suggests that the new architecture of the eurozone requires a new EU treaty "sooner or later". But, says the magazine, "this could take years", because "the appetite for the arduous process of a treaty change is slight in most capital cities".The result for Cameron, Spiegel believes, "is a credibility problem". If for the foreseeable future there is no treaty change, how will he then deliver? And all the time, his party is getting impatient not least because, during his time in office, the EU has increased its powers and shows no signs of stopping. Cameron's "European course" is thus seen as far from "coherent". On the one hand, he is attempting to send signals that he is a eurosceptic, but on the other, "when it matters", he is "pragmatic". Nor does Spiegel see him changing. The blockade threat, it sees more as an "act of desperation", pandering to his critics at home to keep them "sedated".Unfortunately, for Cameron, the very people whom he wishes to "sedate" have seen him coming. It is easy to gull the legacy media, but most people who have a view of the European Union – from either side – can see the transparency of his position. After all, if it is that obvious to the German media, one doesn't need to be a genius to work it out. Despite this (or perhaps because of this), most people now expect him to fudge his forthcoming speech. In any event, it was always more about neutralising the UKIP threat and "sedating" his own party than offering a genuine solution. But, unlike certain other things in this world, it is no longer possible to fake a position. For once, therefore, the cliché does work. Cameron is between a rock and a hard place. Unable to offer a genuine policy on "Europe", he is trying to fudge it in front of a knowledgeable audience who know wriggling when they see it.

Someone close to Cameron should tell him he's on a hiding to nothing. No one is interested in half measures. All those contortions will be for nothing unless he comes up with a serious, and credible proposal for detaching the UK from the European Union. A half-baked renegotiation proposal won't cut it.