EU Referendum: it may never happen? 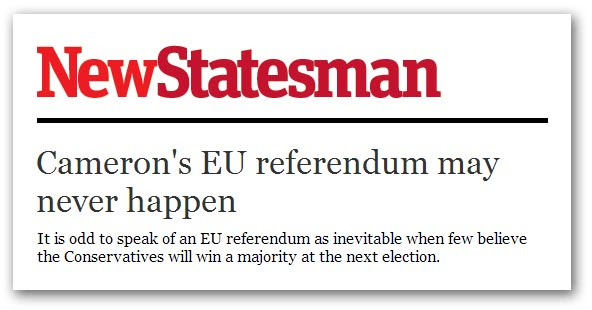 It is left to the Labour supporting New Statesman to pose the obvious question, as to whether there can be an EU referendum if David Cameron is not around as prime minister.
His pledge, says the magazine, is dependent on an outcome that increasingly few believe is likely: a Conservative majority at the next election. A reformation of the coalition would likely scupper any plans Cameron has to bring back major powers from Brussels. In addition, it muses, it is unclear how Cameron will respond if he proves unable to secure the changes he wishes to see. Taking the first point, the main point of the referendum offer, if it comes, is to neutralise the UKIP vote and bring its supporters back into the Tory fold. And if Mr Cameron does make a credible referendum offer, then UKIP supporters are going to have to think very hard about their voting intentions for the general election. As the polls stand, the UKIP support is greater than the difference between Conservative and Labour so, in theory, if all the UKIP supporters transfer to the Tories, this should be enough to win the general – especially as the "UKIP effect" has a disproportionate impact on marginal constituencies. Given that Ed Miliband has recently refused to consider a referendum on the EU, the last best chance of securing a withdrawal from the Evil Empire is through a Conservative success, which would effectively require UKIP to stand down. Subject to that important qualifier, as to whether the referendum offer is credible, UKIP faces the choice of whether to support Party or country – a choice they very often accuse the Conservatives of failing to make. If Party comes first, they might be responsible for preventing us from leaving the EU. Addressing the issue of what would happen if the "colleagues" refuse to negotiate, or the deal is not acceptable, Mr Cameron has to decide then on whether himself to support an exit, or whether to try to a bluff in the Wilsonian mould. Far too many people will spot a faux negotiation though, making it very difficult for Cameron to get away with a sham. But whether the "colleagues" care enough to help him out is moot. Like as not, they will do nothing to drag his electoral irons out of the fire, especially if the result is Ed Miliband, making the UK a referendum-free zone. As to whether Mr Cameron can prevail, forcing the negotiation issue, what he seems to forget is that, if it ever comes to a treaty revision, a convention would most certainly have to be set up. And while there is open access to the convention sessions, the UK would have no control over the outcome, and could not insist that its aspirations were taken into account. It would then be very difficult to throw a strop if the subsequent IGC took its cue from the convention, leaving and repatriation agenda high and dry, putting Cameron on the spot, having to veto the final draft of a treaty as his only recourse. That simply isn't practical politics. And even if Cameron and his advisors aren't trying to assess the ramifications of the different courses of actions available, others will be, especially the "colleagues", who are not going to allow themselves to bounced into junking hard-won treaty principles. Like it or not, therefore, the odds are that Cameron could be setting himself up for an accidental exit. But an exit, whether accidental or intentional, is still an exit, which might mean that we end up with rather a lot of accidental Conservatives. COMMENT THREAD
Posted by Richard at 00:44