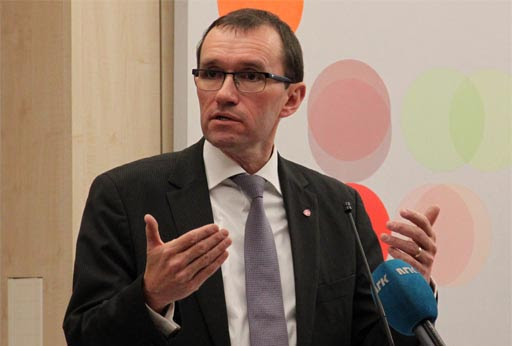 "UK must be wary of EU exit, says Norway minister", headlines The Irish Times, highlighting the start of a two-day visit to Ireland of Espen Barth Eide, Norwegian foreign minister.
This is the second time in weeks we have heard from this gentleman on the theme of the UK leaving the EU, and he is quite obviously a man who finds it easy to access the media, including the BBC. But what none of these informative media sources tells us is that Mr Eide is a fully paid-up europhile.Crucially, during the 1994 referendum on Norwegian EU membership, he worked in the European Movement for the "yes" campaign, holding a senior position as project manager and acting Secretary General.  He favoured EU entry then and he favours it now, even though nearly 80 percent of the population wants to stay outside the Evil Empire.To no one's surprise, therefore, this is a man now who tells us that there are "downsides" to staying outside the EU. "What we do not get is the same level of political influence we would have had as a member. It is good in that it gives you access to a market but it is problematic from a democratic perspective", he says.Passing by the rather interesting assertion that joining the EU might actually increase democracy, one might suggest that the antecedents of this man might actually be relevant when assessing what he has to say, but that is not what our media thinks. And nor indeed do we get any hint of it from thedisgusting propaganda produced by Open Europe.Gleefully, in its daily press summary, it retails the Irish Times propaganda, and then without so much as a blush, repeats the lies from its own director, Mats Persson who, we are told, "discusses" why the "Norwegian model" of EU cooperation "simply wouldn't work for the UK".The interesting thing here is that Persson cannot be unaware of the hostile comments on hisTelegraph clog, any more than he can be unaware of the challenges on the Open Europe blog. His blithe disdain, therefore, renders his "discussion" a naked propaganda exercise. This is not a man interested in the truth, or even in other people's views.

What Open Europe and its fellow travellers clearly do not realise – although they should – is that this doctrinaire approach to information management no longer works. With the advent of the internet, we are able to call out their lies, and provide good evidence to contradict them. Furthermore, those data stay on the net and remain accessible to all comers.

This is going to be the big difference between the coming referendum (if it comes) and the 1975 charade. We are no longer reliant on the propaganda the establishment wishes to serve up to us, and nor are we without our own means of distributing information.

What is going to make our life so very much easier is that the europhiles have not learned any lessons and have not been able to adapt their message to the new information paradigm. The European Union, born of lies and deception, is still reliant on its lies and deception. And its supporters don't yet realise that we're on to them.