EU politics: hammering it out 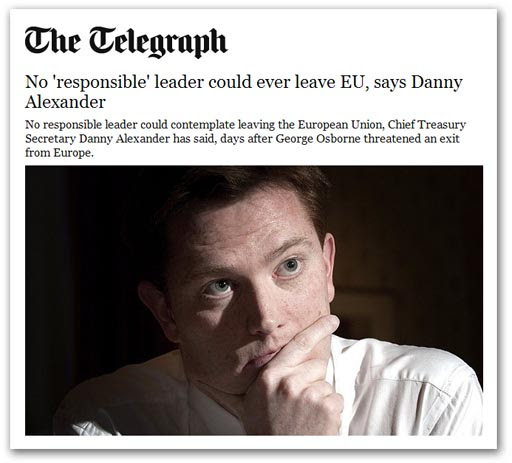 Offhand, I cannot recall a torrent of EU publicity of such intensity, running for so long, directed at the withdrawal issue. No one can say that this is no longer an agenda item, bringing the scaremongers out in full force.
Latest in the long list of recruits to these ranks is Danny Alexander, the Lib-Dem Treasury Secretary and full time europhile. But, in the considered opinion of this man, no responsible leader could "contemplate" leaving the European Union, an interesting development. You will note that the offence here is to "contemplate" – now we're not even supposed to think about leaving. It is also interesting to see how the 'philes are quick to invoke "national interest", with Alexander asserting that this – i.e., europhilia – should "trump party political difficulties".At the heart of his pitch, though, is fear. "I just think that any responsible British politician should not be contemplating British exit from the EU given how serious the consequences should be", he says. So there you are – think of the consequences, but whatever you do, don't even think of leaving. Fortunately for Cameron, he is not entirely on his own with the chief executive of the retailer Next, Lord Wolfson telling the prime minister that although the UK should remain part of the EU it had nothing to fear from being in the "slow lane". Britain should stay in Europe, he says, "but only on the right terms".We also see the British Chambers of Commerce (BCC), which represents many smaller firms, falling into line with the Cameron line, agreeing that EU membership should be renegotiated. However, coming up fast on the other side of the track is Eric Pickles, another cabinet minister who is saying that we have to up sticks and leave. This is on the back of Mr Cameron apparently deciding to reject "nuclear" proposals that are to be outlined by the Fresh Start group of MPs this week – allowing for certain proposals to be vetoed. And now we also get an intervention from George Eustice, who says of Fresh Start: "We have put forward a wishlist which we think is a helpful contribution to the debate. The government has a difficult job in deciding what it can achieve in the negotiations. Putting constructive ideas on the table is preferable to the alternative of everyone obsessing about a referendum on leaving the EU".The man, for once, isn't totally wrong, as there are still a number of Conservative MPs – Bill Cash being one – who want to see an immediate referendum, to give Cameron a mandate to negotiate. Simply, that isn't going to fly, which means that the debate is solidifying without reaching a conclusion. Some are thus arguing that we need to hammer out a change in the terms of the debate, and the vocabulary. Instead of talking about leaving, for instance, the view is emerging that we should instead be talking about "decoupling" trade from political integration. And for this, it just happens that Article 50 is the most appropriate mechanism. Unless someone can come up with such means, to break the logjam, Cameron's "Europe" speech is heading for disaster. The race is on for a magic bullet. COMMENT THREAD
Posted by Richard at 00:08