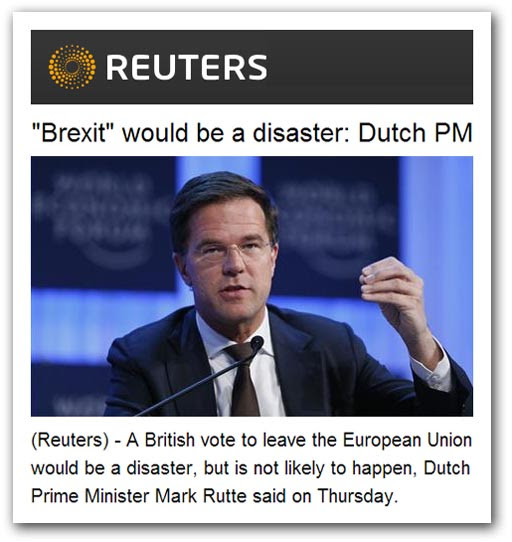 We shouldn't be at all surprised, but Reuters is turning out to be a major scare-factory, offering this FUD-laden headline to the retail media. This one has Mark Rutte, the Dutch PM and one of Cameron's supposed allies, telling the world that Britain leaving the EU would be a "disaster".
So far, the British media haven't bitten, probably because Rutte isn't a household name, but there are hidden depths to the Reuters piece which offer some clues as to sentiment on the continent. Rutte, speaking at Davos, concedes that "Europe needed to reform”, but then rules out "special favours" for one country. He argues for the need to "restore economic competitiveness" – assuming that the competence was ever there in the first place – to "reduce the running costs of the Union" and to "focus on subsidiarity".Says Rutte, "I'm in agreement [with Cameron] on all these issues", then adding, "There might be a difference if at the end of the day David Cameron were to opt for particular opt-outs that he would ask for the UK". The mention of "subsidiarity " is possibly the clue to what is going on. This was part of the package, alongside the opt-outs with which John Major sought to buy off the Danes after their referendum on Maastricht back in 1992, with the UK holding the presidency. The comments made before the referendum make interesting reading, with Major sitting next to a subdued Jacques Delors, telling the media that they were:

... both committed to looking at ways in which the principle of subsidiarity can be enshrined as a natural part of the Community's instincts rather than something that is just wheeled out from time to time when it is convenient.

Now, that seems to be exactly what is happening, with Rutte wheeling out subsidiarity, saying of Cameron's bid for repatriation: "I don't believe you should have unique individual arrangements between individual countries and the EU, but we have to have this debate on subsidiarity".One wonders whether the "colleagues" are going to try for this as their "get out of jail free" card. If so, stand by to dust off the Edinburgh declaration and the examples they gave. I don't suppose they will be any more impressive now than they were then, but the "colleagues" might just be desperate enough to run this past Cameron.

Like as not, they are looking again at the Danish "rebellion" and working out whether the British can be bought off in similar fashion.