EU politics: shoddy propaganda does not serve us well 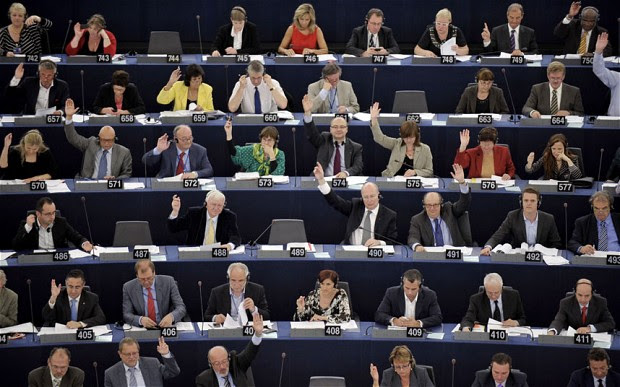 As a propaganda exercise, slagging off the EU in general and the European Parliament (EP) in particular, Andrew Gilligan's piece in the Sunday Telegraph this week got some favourable reviews, not least from Autonomous Mind.The proceedings in the EP are condemned by AM as "an appalling abuse of our money", coloured by Gilligan's description of the manner in which the agriculture committee last week "passed" reform provisions for the CAP, together with the substance, which was "even worse".Gilligan described the proceedings as a "bingo hall vote", filling out the detail with this narrative:

All seven tiers of seats in the giant meeting room were rammed with people, and the sun poured in through big windows at the back. Rows of lobbyists in the spectator section ticked off decisions worth billions as Paolo de Castro, chairman of the European Parliament's agriculture committee, read out the votes as if he were a bingo caller, two or three a minute.

"Amendment 510, those in favour, those against, abstentions, carried", said Mr de Castro, in Italian, without pausing or even looking up. (That amendment alone was something which could cost British taxpayers up to £45million).

Urgent, multilingual cries of "What? What? Where is it?" arose from the MEPs as they rifled desperately through their instructions to learn whether they should lower or raise their hands. "Anyway, we can control later, it is better to make a vote", Mr de Castro said. "Those in favour? Rejected? Oh no, carried, better check".

This, according to Gilligan is "democracy Brussels-style", evoking feelings of despair as he told us that the agriculture committee, almost entirely unnoticed in Britain, "was voting to worsen the deal we've already got". "Over two marathon days", he wrote, "they laid down the future of perhaps the most unpopular policy in Europe, a policy that costs each British taxpayer roughly £180 a year: the Common Agricultural Policy".As anti-EU propaganda, this is good stuff – on the face of it. But it is also a travesty, distorted, erroneous reporting that betrays the writer's almost total ignorance of European Parliament procedure and of the significance of what he saw.  As a record of what passed, his report is about as useful as would be one of mine on the current Test Match series. One of the key procedural points is that the committee didn't decide anything of substance. EP committees don't. What they had been doing (over many months, with laborious reports and equally laborious debates) is processing the thousands of amendments (over 8,000 of them) submitted in response to the Commission's proposals for CAP reform, whittling them down, rationalising them and assembling them into some sort of coherent order - all according to the Parliament's own rules of procedure. 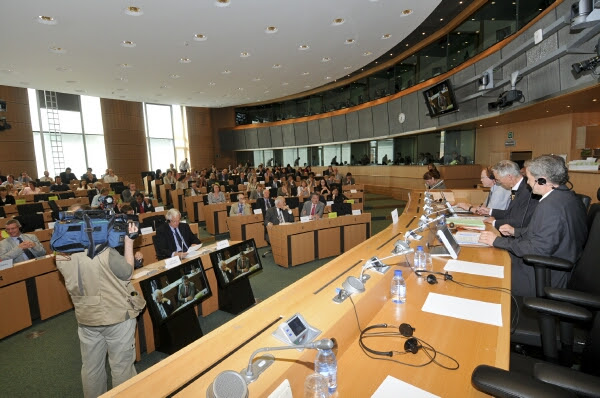 What Gilligan then saw and reported on was the final stage of this process, with a separate voting session to decide which of the amendments should go forward to the full, plenary session of the EP, whence each of those amendments will be voted on, for the Parliament then to arrive at its own "common position".

This is a process that started formally on 12 October 2011 - more than a year ago -  hen the Commission submitted a bundle of proposals to both the EP and the Council, triggering a complex and lengthy procedure.

The proposals were referred to the agriculture committee on 25 October 2011 and, after seemingly endless debates, a draft report was produced on 30 May 2012. Amendments were then tabled in committed on five separate occasions from July 2012 through to December last, and it was on these amendments that the committee voted last week, in the procedure witnessed by Gilligan.

Gilligan argues that this "shows up the EU's flawed democratic processes", claiming that "these hugely important changes have emerged almost entirely without public involvement, knowledge or debate. The amendments, and the compromises between them which were passed, were produced in private, and even published only a few days before last week's hearing".

One must emphasise, however, that no decisions have been taken. No changes have been made. Furthermore, through the tortuous debates, the committee proceedings have been open, and televised proceedings are available to journalists on demand. That we have got to this stage "without public involvement, knowledge or debate" is simply because the legacy media can't be bothered to report it.

At the plenary session – at a date yet to be announced – there will be a vote, but that doesn't decide anything either. On the basis of the amendments accepted and rejected, it simply establishes the EP's "common position". Meanwhile, there have been no less than five separate debates in Council, which has also established its "common position".

Once the EP plenary votes have been cast its common position drawn up, the laborious process of comparing the Council and EP positions must then be undertaken. The Council then has first bite at the cherry, debating which of the EP's amendments to accept, and which to reject, bringing out its own revised common position. Then, the EP committee has another go, analysing the Council position, making its recommendations to the full Parliament.

There then follows another plenary vote, at which stage the aim is to bring the two positions into line. If, however, the EP cannot agree the Council position, the next stage kicks in – the "conciliation procedure" where negotiations are conducted between the Parliament and the Council – the so-called "trialogue", with a view to establishing that much sought-after joint common position.

If agreement is not reached, the legislation falls. If there is an agreement, the result is put to the whole parliament for another vote - the "third reading". If the vote goes against, the legislation also falls. That, dear readers, is "democracy Brussels-style".

One has to note, by contrast, that if this was British legislation, applying only to the UK, like as not it would be produced as a Statutory Instrument, debated perhaps once in a closed committee, and then passed without a vote, and without any facility for amendment, on the "negative assent" procedure.

Where the democracy fails in the EU system, of course, is not primarily in procedural terms. The problem is that there is no demos to legitimise the policy, and the institutions are thus functioning without a democratic mandate (as indeed is our own government).

What, most of all, you can't have, as Defra Secretary Owen Paterson told the Sunday Telegraph, only to have it omitted from its report, is a one-size-fits-all agriculture policy that stretches from the Finland on the Arctic circle to Greece on the fringes of Asia.

Procedures, therefore, are not the issue, especially from a newspaper which then shows a picture of the Strasbourg plenary (top), with the caption, "Last week, the agriculture committee voted on the Common Agricultural Policy", rather than the Brussels committee room in which the voting actually took place (immediately above).