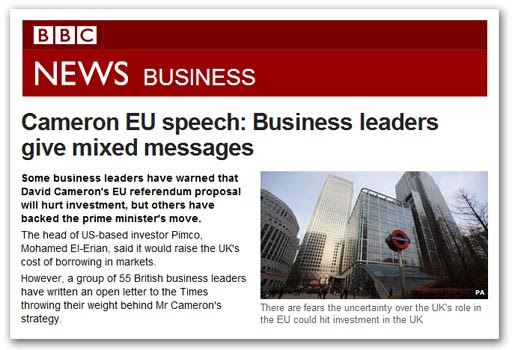 Straight from FUD-factory central comes a piece which has "some" business leaders warning that the very idea of an EU referendum will "hurt investment", although it grudgingly concedes that other business leaders support the Cameron initiative.
Delightfully, the BBC photo-caption includes two of our keywords, "fear" and "uncertainty". We've yet to find an article with all three, but the FUD-hunters are on the case. It it's there, we will root it out.
What emerges from the BBC piece (and others), though, is the prominence given to the "business case" in EU affairs, as if business persons should have a greater say in how we are governed than us mere plebs. Not for the corporates must there be "uncertainty", even though we face that plague every month as we struggle to pay their CEOs' inflated wages.
Interestingly, this emphasis has historical roots. It stems from the Monnet genius of disguising political integration as an economic issue. Over term, it is a ploy the legacy media has fallen for, hook, line and sinker, so much so that that the BBC piece illustrated gets the "business" label. Similarly, most EU news generally finds its way into the business sections of the dead-tree media.
One of the great tricks of agenda setters, of course, is to frame an argument, and nothing serves the europhile cause better than framing the EU as an economic issue. That way, the "business leaders" naturally get a bigger say in what must happen.
However, whether we remain in the EU (and therefore have a referendum) is not a business matter. It is a political question of how we are governed, and belongs rightly to the people. Individuals in business should have no greater say than any other individual, and then as citizens which no special authority or weight.
The point here is that decoupling from political integration can be arranged so as to be economically neutral, or even advantageous. A transition from participation in the single market via the EU to the same level of participation within the EFTA/EEA framework covers the business need, following which "business leaders" should have no special status in the debate.
With that, we may find that many of these so-called business leaders are not actually speaking up for the business case, but have their own political agendas. Many are rent-seekers, arguing for a form of government which best serves their corporate preferences, better enabling them to milk their consumers.
What is "good for business" therefore, is not necessarily good for the people and much of the European Union is a corporate ramp. While they may weep and gnash their teeth in public about regulation, for instance, many corporates gleefully welcome their bonds, for the commercial advantages and the "certainty" it gives them.
Thus, over the long years that this campaign develops, one of the things we must not allow is for the debate to be hijacked by the business fraternity. What the likes of ex-thief Branson and his ilk have to say should have no more weight than any other individual.
This is a debate about government – about how we are governed. The greatest lie is that the EU is a trading bloc. It isn't. It is a supranational government, intent on political union. And, about that, business should mind its own business. We the people, and the people alone, should decide on whether we should want such a government.

Anything else is the tail wagging the dog.