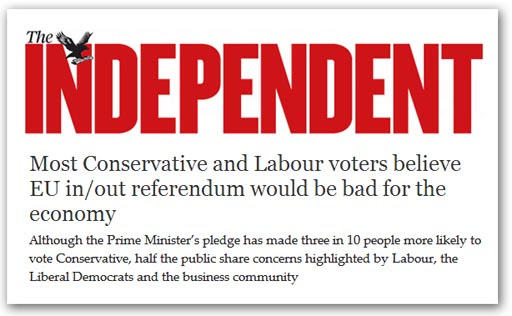 It is a fair bet that, if the legacy media pollutes the infosphere with alarums on how the sky was going to fall in if we had an in-out referendum, and the lumpen masses were poised to fall upon their babies and eat them, then the next carefully managed opinion poll would discover that an in-out referendum was a "bad thing".
And so we are informed in the low-circulation Independent that a ComRes poll has cobbled together a result to please its paymasters. Even then the result does not match the headline. What the poll is testing is the perceived effect of the delay, where some 49 percent of people polled "agree the delay is likely to result in economic harm because of the uncertainty it creates for companies and investors". By contrast, 32 percent disagree with this statement. This is so much fluff, though. What really matters (if only because politicians believe such polls and tend to act on them) is the finding that 30 percent of the public say they are more likely to back the Conservatives as a result of Mr Cameron's referendum promise. This suggests that Ed Miliband could reap an electoral benefit if he matched the pledge. More than one in four voters (27 percent) would be more likely to vote Labour if the party promised an EU referendum, a finding that "is bound to increase the pressure on Mr Miliband from within his party to offer the public a vote". Here, we see the result matching the findings in the weekend's Survation poll in the Mail, where the Conservatives pick up a couple of points in the wake of the referendum announcement, reversing a downwards trend. 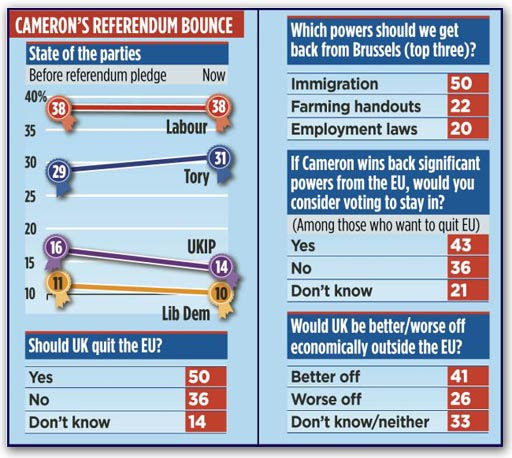 But, to add to a growing collection of meaningless polls, we see the received opinion of which "powers" should be clawed back, the top three coming in as immigration, farming subsidies and employment law.

Just to complete the confusion, though, this poll finds that 41 percent of people believe we would be economically better off outside the EU and 26 percent worse off, topped by a massive 33 percent "don't knows".

That latter finding is the only honest answer. Whether we are better or worse off depends very much on the deal negotiated, and then our own efforts after leaving, although it helps to have the belief system in our favour. As a real finding, it is meaningless, the message being that the polls are simply part of the propaganda war.

And in that war, we are at least entertained by a poll in France by research agency BVA which shows that a majority (52 percent) of French people favour Britain leaving the EU, while 48 percent want it to stay. With a bit of work and I'm sure we can annoy some more Frenchmen, and get that majority to strengthen.