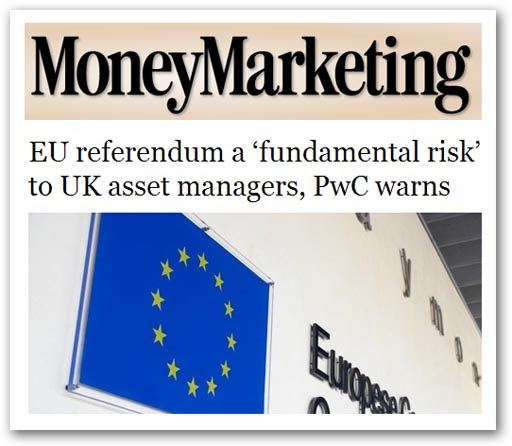 On top of the Ken Clarke extravaganza, who is given a free ride on the BBC Radio 4 Today Programme for nearly twelve minutes, we are seeing evidence of the corporate scare machine cranking up into high gear, in what appears to be an attempt to head off an EU referendum altogether.Mostly, they are not even attempting to arguing the case for remaining in the EU (mostly, one assumes, because the case is so poor). Rather, they are attacking the very idea of having a referendum. The corporates – in their own minds – are supreme, and the thought of us little plebs being allowed a vote fills them with terror. Thus we have the parasites PwC spreading their anti-democratic poison in the corporate ragMoneyMarketing. Parasite-in-chief, PwC hedge fund leader Rob Mellor, is allowed to bleat: "A UK asset management industry outside of Europe may face obstacles to the continued management of assets for EU-based investors. This is a fundamental risk to the growth of the industry".In any free and fair discussion, you would not give this sort of jobsworth bleating more than a short blast of contempt, so lame and dismal is the argument. But the corporate might of PwC gives it open access to the ranks of the brain-dead.

Similarly, we get the vipers' nest of europhila – the London School of Economic - stir up its zombies in the LSE "Growth Commission" to warn us of the terrors to come if we threaten their gravy train.

And sure enough, Sky TV, where corporate shall speak unto corporate, gives the LSE open access, and has professor John Van Reenen (good English name that) telling us:

The idea of leaving the EU would be very, very damaging for the UK, so I personally think the uncertainty around having the referendum is actually going to retard growth and retard investment, so I don't think there is a strong case for having that referendum.

What we are not told, however, is that Van Reenen has been an Executive Committee Member of the Fabian Society since 2006. One has to note, though, the strap line which conveys the same anti-democratic sentiments held by PwC: "The Government just talking about an EU referendum is damaging investment and productivity, influential economists warn", it says.

There, naked in tooth and claw, is the corporate mind exposed. We shall stay in "Europe" and you shall not even think about leaving it, much less be allowed to discuss it. Any idea of democracy and public consent does not even enter their foetid, closeted minds. We the plebs must not dare to question our masters, nor be allowed to debate their folly and their greed.

What last vestiges of democracy we ever had are draining away into the sand.