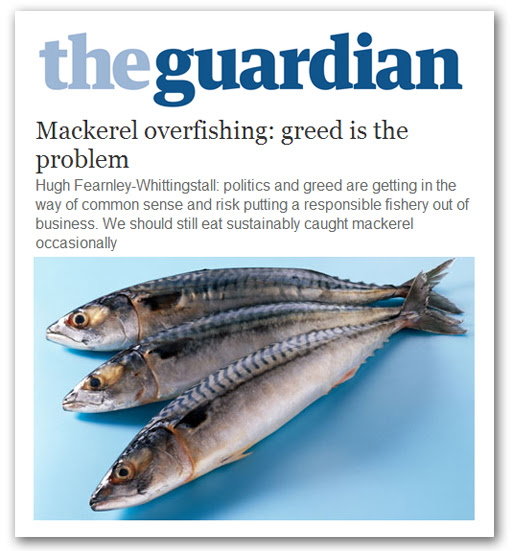 An illustration of just how complicated international relations can become is emerging in real time, as a long-standing dispute over North-east Atlantic mackerel (NEAM) stocks comes to a head, with British ministers meeting fisheries Commissioner Maria Damanaki tomorrow, prior to the Fisheries Council meeting, which will attempt to resolve the dispute.
On the face of it, this is a simple quota dispute between the four main players nations which exploit the stocks, the EU, Norway, the Faroe Islands and Iceland. Historically, the bulk of the quota has been taken by the EU and Norway, but since 2009, Iceland and the Faroes have been demanding a share.
As tensions have risen, relations between the parties have broken down with the Faroese being accused of acting like "pirates", Iceland of "greed" and the EU of bullying tactics, while there is talk of a new fish war and trade sanctions.
The situation is not helped by the removal of NEAM from the Marine Stewardship Council certification scheme, as no longer qualifying as "sustainable stock", and by the Guardian tendency which has Hugh Fearnley-Whittingstall indulging in the most remarkable piece of wishful thinking, when he grandly declares:


… if the countries involved could only agree sensible catch limits this could still be a certified sustainable fishery. The issue could be resolved at a stroke, and we could all go back to eating mackerel again with a clear conscience.

While Fearnley-Whittingstall wants to put the problems down to "politics and greed", which "are getting in the way of common sense", we have here a fiercely complex issue, on four different levels – politics, commerce, science and the environment itself – all of which are intermixed.
If the magic wand of "common sense" could be waved, that would have been done years ago. As it is, the grown-ups are having to sort it out, not least our very own Defra Secretary Owen Paterson – fortunately, a man with some some experience in fisheries policy.
On the political level alone, the situation is extraordinarily complicated, as we are dealing with an amalgam of national interests, the regional bodies of the EU and EFTA/EEA, and a skein of international treaties and agreements and in this first part, we will look at the political structures which create the framework in which discussions are being undertaken.
At the very top of the heap is not the EU's Common Fisheries Policy (CFP), which some think is the driving force, but the UN Convention on the Law of the Sea (UNCLOS). But, because NEAM are a migratory and "straddling stock" – the biomass spread over the territorial waters of different states – there is an extensive web of additional agreements.
The key treaty here is the Convention on the Law of the Sea of 10 December 1982 relating to theConservation and Management of Straddling Fish Stocks and Highly Migratory Fish Stocks, and the 1995 implementing agreement known as the United Nations Fish Stocks Agreement (UNFSA).
But this is also augmented by the Food and Agriculture Organisation (FAO) Code of Conduct for Responsible Fisheries, adopted in October 1995. This is a voluntary agreement, although certain parts are based on UNCLOS provisions and some parts have been given binding effect by means of other obligatory legal instruments, such as the Agreement to Promote Compliance with International Conservation and Management Measures by Fishing Vessels on the High Seas, 1993.
There is also the FAO International Plan of Action for the Management of Fishing Capacity, which came into force progressively, to be fully effective by 2005. Scientific issues relating to human activities affecting, and affected by, marine ecosystems, and in particular fish stocks, are handled by the International Council for the Exploration of the Sea (ICES).
As regards the European Union, the EU ratified the UNLOS agreement in 1998, and subscribes to the FAO codes, the combination being part of the external dimension of the Common Fisheries Policy, set out in detail here.
Although the CFP is not part of the internal market acquis and is not part of the EEA Agreement, trade in fish and fish products is covered, and to some extent is affected by these international treaties and agreements. Norway, of course, represents herself on the relevant bodies, but EU Member States are represented by the European Commission and the EEAS, which also deals withUNCLOS issues.
This is then further complicated by the fact that the EU has concluded or is party to multiple bilateral and multilateral treaties with neighbouring fishing states. For instance, it lists eleven with Norway, of which three are bilateral, eight with Iceland, and one with the Faroes.
Now, because we are dealing with straddling and highly migratory fish stocks fish, the United Nations Fish Stocks Agreement (UNFSA) kicks in and, as this briefing note helpfully explains, the stocks have to be managed by a Regional Fisheries Management Organisation (RFMO), which consists of Coastal States and relevant Distant Water Fishing Nations (other nations with a real interest in the fishery).
In this instance, the relevant RFMO is the North East Atlantic Fisheries Commission (NEAFC), to which the Russian Federation, Norway, Iceland, Denmark (in respect of the Faroe Islands and Greenland) and the European Union are parties. The UK was originally a member but in 2006 the founding Convention was modified and EU Member States as individual members were withdrawn. They are now represented exclusively by the European Commission.
Thus far, and we have only set the scene. We have four nominal parties to this dispute, Norway, Iceland, the Faroe Islands (formally represented by Denmark, an EU member), and the EU representing the UK and others which have a major interest in the issue.
Crucially, in the UK, it is mainly the Scottish pelagic fleet that has the key interest here, but the UK does not have a seat at the NEAFC table, and cannot deal with the parties direct. And that is why ministers are going to Brussels instead of Oslo, talking to EU Fisheries Commissioner, Maria Damanaki, a Greek leftie politicians, born in Crete, and hugely unpopular even in her own PASOK party.
This is not a place where "common sense" will find a comfortable home, and to dismiss the issue as "greed" doesn't even get near.
Part II to follow.
COMMENT THREAD
Posted by Richard at 21:09