EU Referendum: I will not rest 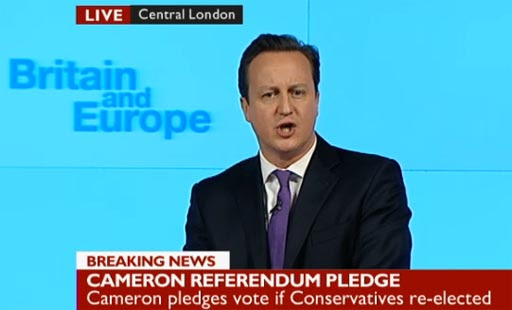 "The most important political speech of his life", says the BBC. He has kicked off the debate with a promise of a referendum by the end of 2017 - in the first half of the next Parliament, on the basis of negotiating a new treaty change.

And to those who say a new settlement can't be negotiated, I would say listen to the views of other parties in other European countries arguing for powers to flow back to European states.

And look too at what we have achieved already. Ending Britain's obligation to bail out eurozone members. Keeping Britain out of the fiscal compact. Launching a process to return some existing justice and home affairs powers. Securing protections on banking union. And reforming fisheries policy.

So we are starting to shape the reforms we need now. Some will not require treaty change.

But I agree too with what President Barroso and others have said. At some stage in the next few years the EU will need to agree on treaty change to make the changes needed for the long-term future of the euro and to entrench the diverse, competitive, democratically accountable Europe that we seek.

I believe the best way to do this will be in a new treaty so I add my voice to those who are already calling for this.

My strong preference is to enact these changes for the entire EU, not just for Britain.

But if there is no appetite for a new treaty for us all then of course Britain should be ready to address the changes we need in a negotiation with our European partners.

The next Conservative manifesto in 2015 will ask for a mandate from the British people for a Conservative government to negotiate a new settlement with our European partners in the next parliament.

It will be a relationship with the single market at its heart.

And when we have negotiated that new settlement, we will give the British people a referendum with a very simple in or out choice. To stay in the EU on these new terms, or come out altogether.

It will be an in-out referendum.

Legislation will be drafted before the next election. And if a Conservative government is elected we will introduce the enabling legislation immediately and pass it by the end of that year. And we will complete this negotiation and hold this referendum within the first half of the next parliament.

"I will not rest until this debate is won". That's what the man said. There is the need for treaty change, he says, but in the end the choice will be for the British people.

Distortions and lies pervade his speech - it is built on a foundation of lies. Norway and the "no influence" meme is still embedded: "And while Norway is part of the single market – and pays for the principle – it has no say at all in setting its rules. It just has to implement its directives", he says.

With that lie - a clear, naked lie - he sets the tone. It is going to be a dirty campaign, with the BBC giving the first word to Mandelson: "a schizophrenic speech", the ex-commissioner says, "a completely bogus set of demands". "Reality, delusion and ignorance", says Autonomous Mind. Boiling Frog calls it "bullshit bingo".

The full speech is here.
COMMENT THREAD
Posted by Richard at 18:09