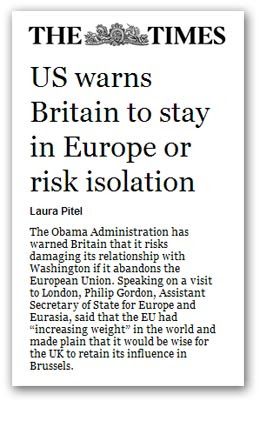 So we get another scare – this one coming from the United States, running the "isolation" meme.  Perhaps we should have joined Nazi Europe in 1940 if "isolation" is such an issue.

In fact, successive US administrations have supported European political integration, right from the time when the CIA was funding the European Movement, through to the Kennedy administration which did its level best to ease Britain into the EEC.
Now we get Philip Gordon, an unknown (in Britain) State Department official, telling us: "We have a growing relationship with the EU as an institution, which has an increasing voice in the world, and we want to see a strong British voice in that EU. That is in America’s interests. We welcome an outward-looking EU with Britain in it".
The man then has the temerity to question the idea of a plebicite, observing that: "Referendums have often turned countries inwards". That is pretty damn rich for a country that that set up a referendum in Iraq in 2005, to approve a new constitution and set this nation back on the road to resuming sovereignty. We heard no complaints then about the risk of Iraq "turning inwards".
And, although Gordon might be cited as a "career diplomat, foreign policy expert, and the current Assistant Secretary of State for European and Eurasian Affairs", he is perilously close to crossing the line and interfering in the internal affairs of a (once) friendly country. We have already had enough interference from the US on this matter, and we can do without more.
Needless to say, though, this unwanted intervention gets full frontal treatment from the BBC and from numerous examples of the legacy media, not least The Times. Thus is the British media showing its true, europhile colours, giving uncritical coverage to a succession of scares, and not even attempting to explain the issues to the public.
In this instance, though, if the United States really wants friendly relations with the British people, its would be best served by keeping silent on this extremely sensitive subject. It would also be a good start if it told its junior state department officials to foxtrot oscar.

Autonomous Mind says it more politely: "please do not presume to meddle in our affairs". But it means the same thing.