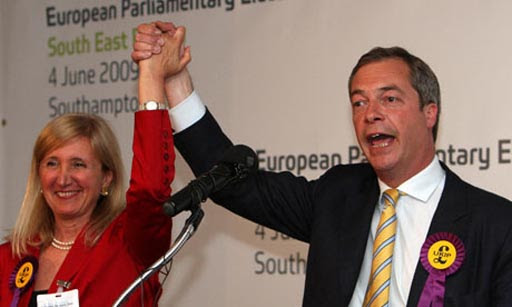 From many accounts, Marta Andreasen is an impossible woman, and UKIP is well rid of her. But the fact that she became a UKIP MEP at all is a reflection of how Nigel Farage manipulates the party list to put his own candidates in place – very often in breach of his own party rules.

Nevertheless, when she was first introduced at their conference in Bournemouth, a party activist remembers that Nigel himself introduced her as their new golden girl - the UKIP equivalent of a then ascendant Sarah Palin. How things change.

For what it's worth, my view is that she should never have been included in the list in the first place. Those with longer memories will recall that before Farage found her a home, she had already sought a place on the Tory list, only coming over to UKIP when offered a paid post as its treasurer.

However, one cannot entirely disagree with her analysis of UKIP, when she says that that party has [some] "good people in it at grassroots".  Despite that, she has been at odds with Farage for a long time, having called for his resignation as party leader as early as May 2011. And she is not wrong when she declares that he treats any views other than his own "with contempt".

Andreason saw UKIP as his plaything "to mould and shape in any way he sees fit, regardless of the views of others". Sadly, there is truth in that as well. I myself formed that view long before she joined the party, and very much recognise the validity of her claim that, "Nigel promotes the people who say yes to him and will be grateful for getting the job and will never contradict him".


"Under his leadership - and I have questioned his leadership obviously a number of times – the party has become a dictatorship", she said in an interview earlier this month, adding: "This is a Stalinist way of operating and he doesn't care about the membership or the grassroots…".

Currently, she says about Farage, "His actions, surrounding himself with an old boys' club of like-minded sycophants, are dictatorial, in sharp contrast to those of David Cameron, who has shown he can listen, adapt and do what is right for the country, not just for personal gain".

Responding to her defection to the Tories, Farage says of Andreason, "Having left the OECD, the European Commission and UKIP in unpleasant circumstances, the Conservative party deserve what is coming to them. The woman is impossible".

On the other hand, Grant Shapps, the Conservative chairman, says that her defection is a vindication of Mr Cameron's European policies. Her words on the Prime Minister's record "prove that the Conservatives are the only party who can protect Britain’s interests in Europe".

Standing back from that, one can only regret - as does Autonomous Mind - that the eurosceptic cause is served so badly by all these shenanigans. We have enough difficulties and hurdles without our own side adding to them.
COMMENT THREAD
Posted by Richard at 23:53