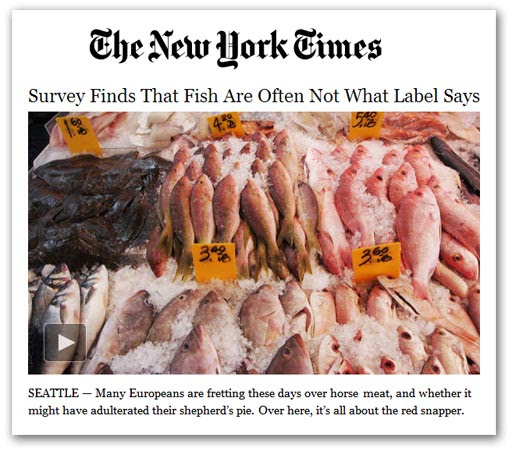 From 1,247 identified samples of fish purchased from retail outlets in the United States, 33 percent (401) were mislabelled. That has been the finding of a survey on seafood fraud by the conservation group Oceana (full report here), which has been running in the US press for the last few days.

Inevitably, papers such as the New York Times are drawing comparisons, this paper telling its readers that: "Many Europeans are fretting these days over horse meat, and whether it might have adulterated their shepherd’s pie. Over here, it's all about the red snapper".

Surveys previously of one kind of fish had found mislabelling rates of 25 to more than 70 percent for commonly swapped species such as red snapper, wild salmon and Atlantic cod. And in this survey the most commonly sampled fish, snapper and tuna had the highest mislabelling rates (87 and 59 percent, respectively), with the majority of the samples identified as something other than what was purchased.

Halibut, grouper (not the Lib-Dem variety), cod and Chilean seabass were mislabelled between 19 and 38 percent of the time, while lower levels of mislabelling were noted among salmon (7 percent) and sole (9 percent).

Some mislabelling, says Oceana, may result from human error in identifying fish or their origin. More often, it is driven by economic gain, as when a cheaper or more readily available species is substituted for one that is more expensive, desirable or in limited supply.

This type of fraud, it says, not only cheats the consumer, but it also hurts honest fishermen and seafood suppliers who play by the rules. Mislabelling can also provide cover and profit for illegal or unregulated seafood, and the fraud can also have serious health consequences when mislabelled produce masks undeclared allergens, contaminants or toxins.

Reinforcing the assertion that this is not a victimless crime, Reuters joined in with a report that Interpol had launched a global crackdown on illegal fish catches worth up to $23 billion a year.

The agency also made comparisons with "Europe's scandal of horsemeat sold as beef", with Interpol declaring that: "The last decade has seen an escalation of trans-national and organised criminal networks engaged in fisheries crime". Interpol's head of its Environmental Crime Programme, David Higgins, described the crime as covering everything from illegal financing to mislabelling.

Interestingly, the project, with an annual budget of €300,000, is part-funded by the Pew Charitable Trusts and the Norwegian government. Says Anthony Long, head of the Pew's global campaign to end illegal fishing, "One fifth of the fish that come out of the water are believed to be illegal, unreported or unregulated".

A study published in 2009 estimated illegal fishing was worth between $10 billion and $23.5 billion a year, so part of the current plan is to set up a new fisheries crime working group.

Interpol's David Higgins also thinks consumers should be more demanding, partly because Europe's meat scandal has exposed how easily horsemeat can be passed off as more expensive beef. "Can the supermarket vouch for where the fish has come from?" he asked, then posing another question: "what's in your fish fingers?".

He may well ask. But according to the little Europeans, the answer is more labelling - presumably so that we can have still more mislabelling.
COMMENT THREAD
Posted by Richard at 23:19