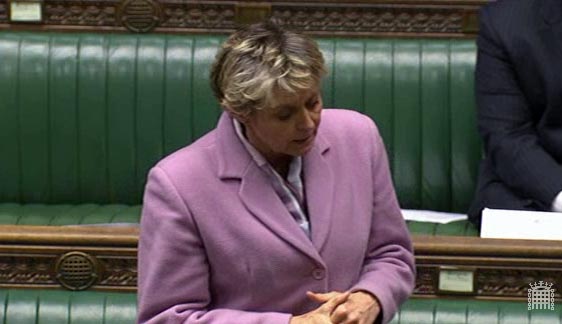 Adding to the growing evidence that public figures and the media have little idea of how we are now governed, we retail below several recent examples.

The first in line would have been seen by watchers of the Murnaghan programme on Sky yesterday, when they were treated to a dissertation from the tight-lipped Anne McIntosh, MP. She heads up the EFRA Select Committee and has been voluble in the Commons (pictured above) about imposing an import ban on processed foods, to prevent products adulterated with horsemeat reaching British consumers.

As she had done in the Commons, she cited an old case from 1979, known as the "Cassis de Dijon", as justifying an import ban. She argued that this French low alcohol product, which had been refused an import license by the German authorities, provided a precedent for a temporary ban while the issues were sorted out.

In fact, though, while import of the product had been temporarily banned, the subsequent court casevery much established the fundamentals on which current EU rules are based, effectively setting the principles by which import bans are prohibited.

Effectively, the very case that McIntosh cites as permitting a temporary export ban, is now the one used as a precedent to rule out the very ban which she calls for. She has got things completely wrong.

However, Murnaghan yesterday went on to cite the French ban on British beef as a result of BSE, but there the French government, calling in aid its own expert authorities, cited health grounds. This, in a highly contentious decision was subsequently upheld by the European Commission.

Restrictions on free movement of goods on health grounds are permitted by the Treaties, currently Article 36, but, since it is accepted that the horsemeat adulterated beef presents no risk to health, it would be difficult to invoke this Article as justifying a ban.

Today, though, we see Morrisons managing director, Gordon Mowat, tell the BBC that "a simplification of the supply chain was needed so customers knew where their products were coming from". The supply chain had been "allowed" to get too complicated. 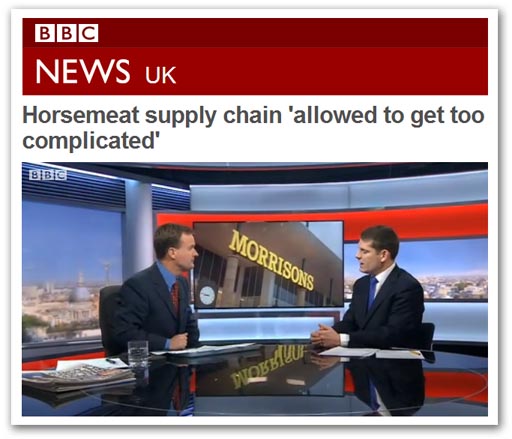 This led to a moronic question from the BBC interviewer, who asked: "Do you think it's time the government stepped in and actually simplified the supply chain, so that an animal over here might not get slaughtered in another country, processed in another country and then sent back as a ready meal?"

You would think that the europhile BBC, which so often gives a platform to anyone prepared to extol the virtues of the Single Market, would realise that the very thing suggested there is impossible under the self-same Single Market. National governments no longer have the power to "step in" and simplify the food "chain".

Again and again, though, one confronts this startling level of ignorance which in some cases amounts to a complete refusal of europhiles to accept the consequences of our membership of the EU.

Thus, yesterday, I found myself on the Telegraph website dealing with people who refused to believe that food inspection standards were so tightly controlled by the EU that we were limited both as to the minimum standard and the maximum and, especially, as to frequency at which official inspections could be carried out.

To the claim from "putneycommon" that "each country is free to have higher standards of inspections … if they desire", I was moved to respond (in several posts) that this was not the case.

As I pointed out in my earlier piece, the organisation and procedures to be adopted by "competent authorities" are governed, down to the smallest detail. Firstly, there is – as previously explored -Regulation (EC) 854/2004" laying down specific rules for the organisation of official controls", sub-titled: "Requirements and responsibilities of Competent Authorities".

But that is not even the half of it. As to procedures, and the all-important frequencies of inspection, we have Article 8 of Council Directive 93/43/EEC, and in particular Art 8 (2).

Looking at this, we find it requires that: "Member States shall provide that all food premises are inspected at a frequency which has regard to the risk associated with the premises". On the face of it, that is pretty anodyne, but it has profound implications when we start putting it together with other parts of the acquis.

In this context, our next port of call is Regulation (EC) No 882/2004 "on official controls performed to ensure the verification of compliance with feed and food law, animal health and animal welfare rules". Article 3 is the "killer" here, with the reference of frequency of special interest.

"Member States", it instructs, "shall ensure that official controls are carried out regularly, on a risk basis and with appropriate frequency, so as to achieve the objectives of this Regulation".

Again, we see anodyne wording, but that belies its power. Competent Authorities are given a list of things they must take into account in defining the frequency of inspections, including the "food business operators' past record as regards compliance". The very clear inference from the totality is that, as long as the operator presents a favourable profile, the inspection frequency must be reduced.

If there is any doubt about this, Recital 13 sets out the key parameters, stating that: "The frequency of official controls should be regular and proportionate to the risk, taking into account the results of the checks carried out by feed and food business operators under HACCP based control programmes or quality assurance programmes…".

There, tucked into the text is the next "killer" word - "proportionate". This refers to the proportionality principle, which is actually set out in Article 5 of the Treaty of the European Union. The rule limits actions to those necessary to achieve the objectives of the Treaties – no more, and no less.

Application is further elaborated here. The principle first affected EU law, we are told, in theInternationale Handelsgesellschaft case in 1970, where it was stated: "A public authority may not impose obligations on a citizen except to the extent to which they are strictly necessary in the public interest to attain the purpose of the measure".

Proportinality is regarded as a safeguard against the unlimited use of legislative and administrative powers and considered to be something of a "rule of common sense", according to which an administrative authority may only act to exactly the extent that is needed to achieve its objectives.

Standing back from this, nowhere will you see anywhere in EU law a specific restriction, overtly stated, limiting the frequency of inspections that may be carried out - or even frequency and extent of food sampling.  EU law is rarely that specific. You have to put together Regulation 854/2004, Art 8 of Council Directive 93/43 and Art 3 of Regulation 882/2004, tie them in with Recital 13 of 882/2004 and add Art 5 of the Treaty of the European Union. Stir well and all becomes crystal clear.

Certainly, the EU's Food & Veterinary Office (FVO) is in no doubt that frequency of inspection comes within its purview, as can be seen from this report. See page 14, where reference is also made to uniformity of inspections – another key parameter, one which the FVO seeks to impose across the entire 27 Member States.

And should the FVO not intervene, the issue of proportionality is judiciable both in respect of UK law, via judicial review, and in the ECJ. It is entirely open to food business operators to challenge competent authorities in the event that they believe inspection frequencies to be excessive, as indeed I once did, on behalf of a group of slaughterhouse owners.

Complicated this may all be, but that is now part of our system of government – where the minutia of administration is dictated by an alien power. How interesting it is, as Booker observes, that those who are most in favour of it seem to be most ignorant of what it entails.
COMMENT THREAD
Posted by Richard at 16:49