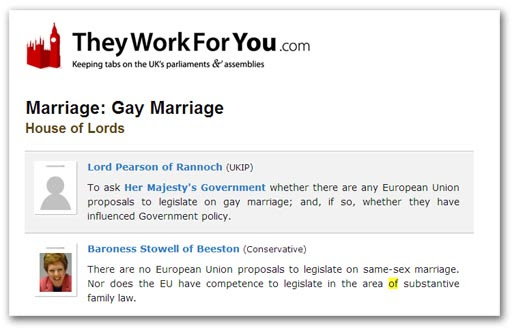 Despite the multiple errors in UKIP's claim about EU involvement in the gay marriage furore (analysed here) its story remains on its website, and is still doing the rounds.This contrasts with the analysis offered by Booker and myself, on the role of the Council of Europe, which UKIP chooses to ignore. It is thus interesting to see last year's official EU statement on the the issue, where it states:

The EU strongly supports the Council of Europe's action aiming at combating all forms of discrimination against lesbians, gays, bisexuals and transgender persons. The EU is ready to strengthen cooperation with the Council of Europe in this field - as it is mentioned in the EU Strategic Framework and Action Plan on Human Rights and Democracy – on the basis of complementarity. In particular the EU is prepared to develop a strategy on how to cooperate with third countries, including within the Council of Europe.

We also see the EU state that it "also looks forward to the review of implementation of the Council of Europe’s Recommendation CM/Rec(2010)5 on measures to combat discrimination on grounds of sexual orientation or gender identity, an important reference document for member states of the Council of Europe and also for the EU".Then there is Your Freedom and Ours which retails Peter Tatchell noting that, after he applied to the European Court of Human Rights to strike down the bans on restrictions on gay marriage, and then lobbied the Conservative Party:

... things started to happen. Astonishingly, within three months of our application to the European Court, the Government announced that it was going to consult on legalising gay marriage. They knew that there was no argument they could use in Strasbourg that would be anything other than bigoted and intolerant. I think they realised the game was up, and decided it was better to lead on the issue and get the kudos of enacting liberal reform than be dragged through the courts. It may have been a pure coincidence, but it does strike me as very closely mirroring the pattern of events that I set in place.

These points very much confirm the pivotal role of this recommendation and the Council of Europe, in concert with the ECHR, the dynamics of which we identified.

As regards UKIP's claims, we now have the results of Lord Pearson in the Lords questioning HM Government about EU involvement .

All this, essentially, shoots the UKIP fox. Maybe now the party will remove its error-strewn claims from its website, recognising that it got its narrative hopelessly wrong.