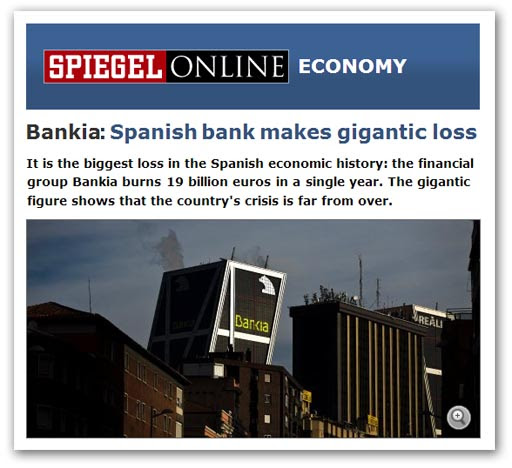 Bankia we are told is a symbol of the Spanish housing and credit crisis. The group was formed in the wake of the financial crisis from seven troubled savings banks - and then evolved into a national nightmare.

And what is a national nightmare today, could become – and most likely already has become – a European nightmare. But then, RBS hasn't done so very much better, declaring a loss of £5.2 billion, although it has managed to keep the pot of gold open, with £600 million bonus payments.

The EU, therefore, has delivered itself something of a publicity coup with its proposals to cap bankers' bonuses - although I defy anyone to show me where, in the legislative proposals, where this appears, much less in the European Parliament response.

But then, so much of this is smoke and mirrors that it is very difficult to find out what is actually going on and, as we know, the media don't ever bother trying. They just vomit out the latest press releases.

I am not even sure that the EU has the legislative competence on this issue, and is trying it on to see how far it gets. In this, there is an amount of complicity with (some) Member States, who are happy to see the EU take the flak, saving them having to face down their own rapacious bankers.

But, for the ordinary man who sees banking losses multiply, while their thieving corporates make no efforts to retrain their own greed, this becomes the ultimate populist issue – a wonderful irony for a construct which publicly deplores populism.

All of this though, allow the likes of the BBC to keep attention focused away from the main issue, which is that this current round of legislation is the implementation not of EU proposals but of the Basel III agreement, covering up the failures of the previous rules.

Keeping the public "debate" focused on bonuses is a wonderful way of distracting the "man in the street", but the greater effect of the rules – insofar as they are capable of being understood – are virtually escaping public scrutiny.

The net effect, then, is to have disasters like Bankia, and more like them to follow, which eventually leads to real suffering by real people, while the corporate swindles go on unchecked, and the thieves in suits strut their stuff.

It is a while since I used the catch phrase: "and the reason we should not rise up and slaughter them is?" Answers on a postcard please … but I suspect the Post Office will not get rich on the proceeds.
COMMENT THREAD
Posted by Richard at 19:13