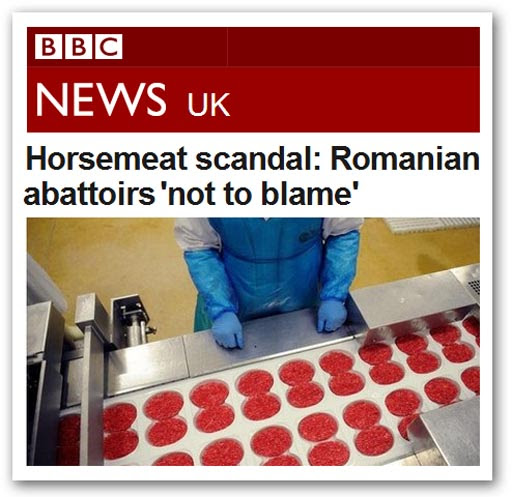 Catching up on the stuff we were writing overnight, the BBC is retailing denials from the Romanian prime minister that his country's abattoirs are involved in the horsemeat scandal.
This is Victor Ponta, who, expressing anger that his country had been blamed, says, "From all the data we have at the moment, there is no breach of European rules committed by companies from Romania or on Romanian territory".Without even having to check this, there is good reason for accepting this statement at face value. As we pointed out earlier, the false labelling scam does not work that way. Most often, meat is legitimately produced and only downstream does it acquire a new identity. The difficulty for investigators is that, if the labels are fraudulent, and the meat has undergone an identity change, the actual indications of origin may be false. Just because either labelling or invoices say the product is Romanian does not mean that is the place of slaughter. Even then, slaughtered animals loose their identity once they are butchered in cutting premises, acquiring the "establishment number" of the premises in which the meat is packaged. At that stage, the meat could be from anywhere, even imported from third countries. But even then, that is not the whole of it. As this report indicates, processed horsemeat products are sold quite legitimately in Continental supermarkets, which means that horsemeat will be legally held in many processing plants. There is always the possibility, therefore, that substitution occurred in the processing plants themselves, with the paperwork doctored to suit. As we illustrated in our first piece, process workers would have no idea what type of meat they were handling. In fact, a process one day could be legitimate, and the next day not, depending on the labelling applied to the end product. The complexities, though, are beginning to show with the Irish end of the horsemeat scandal, where the Irish authorities pinned the problem on Poland, yet the Polish authorities are denying involvement. Thus, both countries (Romania and Poland) fingered as the source of illicit horsemeat are denying their involvement. As regards Ireland, there is even some suggestion that Ulster gangs could be involved, putting abandoned horses that are unfit for human consumption into the food chain. And, although this has been dismissed as speculation, putting Polish labels on the meat would be a good way of throwing investigators off the scent. Anyone with any real knowledge of the system will understand these complexities. Traceabilty for a whole range of foods, and especially high-value products such as meat, is a joke. Thus to suggest that you can police the internal market on the basis of a paperwork trail is a very bad joke. COMMENT: "HORSEMEAT" THREAD
Posted by Richard at 16:49