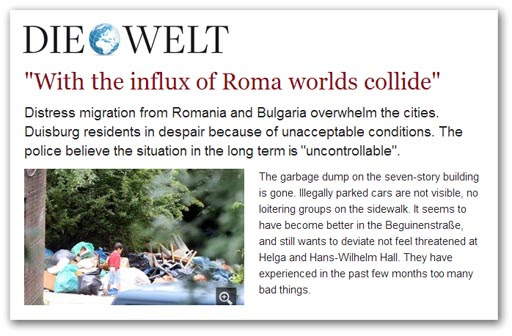 We saw recently in Die Zeit the concerns over Roma immigration. And now we have Die Welt recording how appalling conditions from eastern slums have suddenly moved to within a few metres of the German welfare society. "As worlds collide, integration comes to its limits", say the local police and security sources in North Rhine-Westphalia.

Currently, there are an estimated 209,000 Romanians and 121,000 Bulgarians living in Germany, although how many are Roma is not known. Thousands more from southeastern Europe arrive every month and some cities have reported a six-fold increase since the two countries became EU members.

Officials in Duisburg, in an internal report of September 2012, offer a troubling assessment. "As long as there is unrestricted immigration and unregulated settlement, the problems are not controllable by the police", they say.

The police in Duisburg have suffered particular pressures. Last year, they recorded some 13,000 staff hours on immigration-related issues, trying to prevent tension escalating. And they have nearly 350 live investigations, mainly for fraud and simple theft.

Officials warn of an additional area of conflict. It is not only the Germans who feel threatened, but Turkish and Lebanese immigrants. Several times the police have had to intervene to break up armed fights.

There was a major confrontation in September 2012, when the police recorded a targeted attack by young men of Turkish origin against young Romanian Roma. The police consider that the ever-increasing and uncontrolled growth of the Roma was the catalyst of this type of attack.

In the UK, Nigel Farage may be over-egging the numbers we can expect from 1 January 2014 but, if this German experience is any guide, he cannot over-exaggerate the problems that will arise from unrestrained Roma immigration.

A potential ally is the head of Dortmund Social Department, Birgit Zoerner. She is head of the German Association of Cities and a member of the newly established federal-state working group on "poverty migration from Eastern Europe".

Her focus, though, is on financial support from the EU – of which Farage would doubtless not approve. The EU can organise bail-outs for banks, Zoerner says, and we now need urgent rescue packages for people. But she also argues for restriction of free movement until the EU is able to control immigrants and manage their distribution.

The current European-led movement, she says, disrupts communities because new immigrants mostly prefer the districts which have already succumbed to major social challenges.

And in a new development, Interior Minister Hans-Peter Friedrich is demanding that the EU make money available for the integration of Roma into their native countries. These people, he says, present schools, municipalities and charitable organisations with unique challenges.

Local governments are complaining that they are now being made to bear the costs of EU expansion, concerns that the federal government in Berlin have thus far ignored.

That presents a somewhat different perspective to the immigration debate. While national politicians parade on the European stage, it is local government – and local taxpayers – who are bearing the costs, as we have already seen with Rotherham.

EU membership, therefore – always regarded as mainly a national issue – now has an even greater and more urgent relevance to local politics.
COMMENT THREAD
Posted by Richard at 08:26