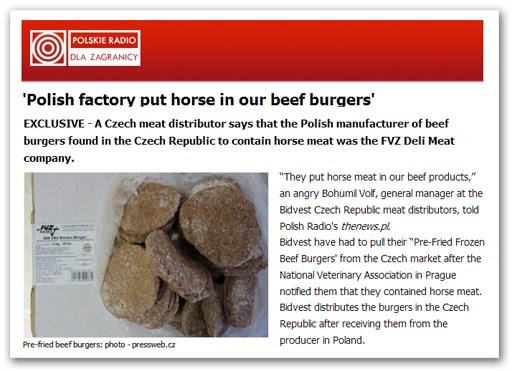 While the Italians were trying to work out whether they had a new local government, or not, the business of their real government went on in Brussels, not least with the Agriculture Council meeting.Here, the repercussions of the weeks of publicity over horsemeat were felt, with the "colleagues" obsessed with imposing new labelling requirements in the hope that somehow, miraculously, they would cure the problems arising from a single market in meat and meat products. In this, we have an encapsulation of the entire European Union experiment, which makes the whole issue so rewarding for study. Faced with trying to defend the indefensible, and to make the unworkable work, the "colleagues" retreat to their fantasy world, ending up bickering about the minutia of labelling, to the extent that the Austrians wanted the life history of every morsel of mince on their packs. Particularly aggressive, though, were the Poles, denying everything, and complaining that their industry had been unfairly pilloried. Then, this morning, up pops Polish Radio, pinning some of the blame for horsemeat burgers in the Czech Republic on a company called FVZ Deli Meat, Poland. Some of the aggravation may stem from last year when it emerged that a criminal ring had sold road salt to bakeries and meat-processing plants.

Prague banned Polish salt imports in March 2012, followed by a range of food products but then, six months later, Czech alcohol was banned across the region after there had been dozens of deaths as a result of drinking fake spirits tainted with methanol.

The Czechs were forced to halt exports to Poland and Slovakia, but Warsaw and Bratislava maintained their own bans well after the Czechs implemented a new system to control quality, in a move analysts suggested could be motivated more by opportunist protectionism than public health concerns.

The last thing we want is to be caught up on these disputes and in the good old times, we here would just shut out the cowboys until they had sorted themselves out. Now our ministers have to waste their time in Brussels, listening to the fantasy outpourings of the "colleagues" who have very little grasp of the issues.

Only the Danes, it seems, had the sense to recognise that new labelling would not have the slightest effect in preventing fraudulent meat adulteration.

So it is that we are locked into this unreal system, while the likes of Mr Cameron tell us how important it is to be on the "top table" in Europe, when the only reward for that is a great deal of gibbering and very little sensible action. We wold be better off burning the table and banning the burgers.