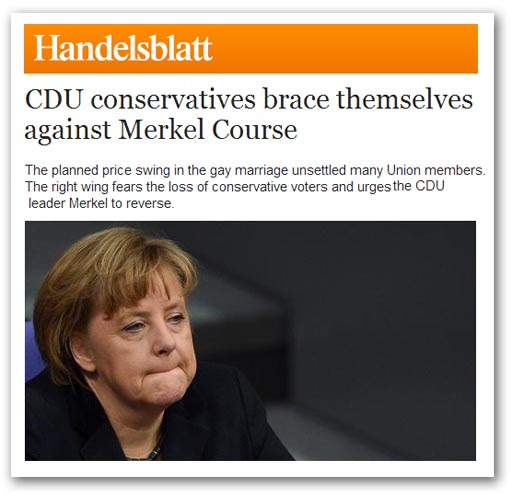 It isn't only Mr Cameron who is having trouble in his party with gay marriage. German chancellor Mrs Merkel seems to be having similar ructions with her own CDU.

According to Handeslbaltt, there are increasingly hostile noises coming from senior party members. Most voluble of these is Saxony CDU parliamentary leader Steffen Flath, who is also a member of the "conservative network" in the Berlin district.

He is warning against Merkel's proposal to grant to full equality to same-sex partnerships. He concedes that the CDU should continue to develop as a people's party, and to take note of social changes. But, he says, "that does not mean that you have to run after every fashion or equal to the general zeitgeist. This is especially true for a conservative party like the CDU".

Flath is calling on Merkel to focus on the core values of the CDU. "Only in this way can the trust and credibility that the party has lost be recovered," he adds.

Berlin is an awfully long way away, and even more so in political terms. As far as the parochial British media goes, it could be light years away. Yet, in Flath, we could have a British Conservative talking. The response from some of the knights of the shires has essentially been in the same terms.

Doubtless, there are senior German politicians asking the same questions of Merkel that have been posed about Cameron – as to why she is prepared to put herself out on such exposed limbs, in support of this minority cause, which is causing so much trouble.

Of course, it makes sense when the European (i.e., Council of Europe) dimension is factored in, but since the various national media still live in their own tiny bubbles, very few are joining the dots. Nevertheless, the spell cast by "Europe" does seem to trump all other considerations, causing politicians to lose all sense of their core values.

If only we could discover what it is that exercises such a grip on the minds of our politicians, we could then use it to our advantage and make them work for us once more.
COMMENT THREAD
Posted by Richard at 12:32