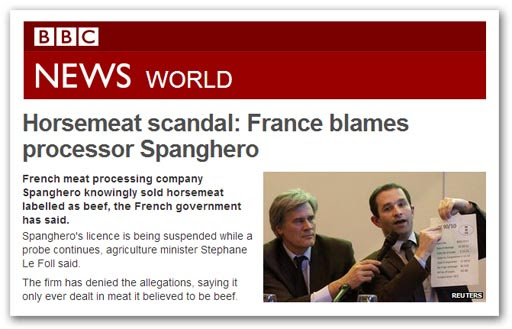 The BBC reports, alongside others, that the French meat processing company Spanghero knowingly sold horsemeat labelled as beef – according to the French government. Spanghero's licence has been suspended pending further investigations.Not untypical of such occasions, the firm has denied the allegations, saying it only ever dealt in meat it believed to be beef. However, French consumer affairs minister Benoit Hamon said the meat left Romania clearly and correctly labelled as horse. It was afterwards that it was relabelled as beef. "From the investigation, it would seem that the first agent or actor in this network who stamped 'beef' on horsemeat from Romania was Spanghero", Hamon says. There was "no reason to doubt the good faith" of the Romanian abattoir that originally provided the meat, Hamon adds. The French government believes that the fraud went on for six months and involved around 750 tons of meat. Spanghero would have made ​​a profit of €550,000 euros over the period. In total, 4.5 million items made ​with horse meat in them have been despatched to supermarkets and other retail outlets. At least 13 countries and 28 companies have been recipients.But, says the government, some blame may rest with Comigel, which made the ready meals sold throughout Europe. Staff there, Hamon avers, should have noticed anomalies in the paperwork. They should also have realised from the smell and look of the meat once it was defrosted that it was not beef. Hamon, however, hasn't fully grasped how processing works, with frozen blocks being used, without defrosting, in order to keep mixes cool. Operators on the production floor, many of them on minimum wage, have next to no chance of detecting substitution. This is confirmed by L'Express which has Comigel saying that product was "cooked without thawing", making it impossible "to detect deception" by its colour or smell.But, to have detected the fraud would have been simple. Pre-production, core samples from a representative number of packs could have been taken, and tested. No special analytical technology would have been is necessary. In my day, a glass beaker, water and a bunsen burner was all that was needed, for what is called the " boiling test ". Apart from detecting taint and rancidity, horsemeat can easily be distinguished from beef by this means.The point, however, is that such direct testing – part of what is known as "organoleptic evaluation" – has been dropped from the control regime in favour of a paperwork audit. And there is no way the EU can evade responsibility for this, even though it is trying. 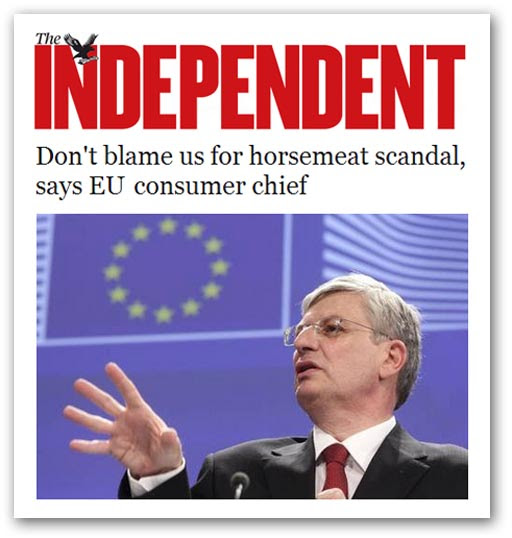 Health and Consumer Commissioner Tonio Borg charactarises this crisis as one of "wrongly labelled products", about which there are EU rules. Enforcement of the rules, he asserts, is up to national authorities - who must therefore take any blame.

To characterise this problem as one of "wrongly labelled products", though, is completely to misidentify the problem. On the one hand, this is a structured, long-term fraud and, on the other, there has been a massive failure to detect it. And the primary responsibility for picking up this sort of thing, according to the very rules which Commissioner Borg is responsible, is the "food operator".

But the EU goes further than simply setting out responsibilities. It also specifies in very great detail the means by which safety and food standards generally shall be maintained, requiring the use of a system known as Hazard Analysis and Critical Control Points (HACCP).  The so-called HACCP principles are written into the DNA of EU regulation, required by Article 5 of Regulation (EC) No 852/2004.

HACCP, says the EU, "is a tool to assess hazards and establish control systems that focus on prevention rather than relying mainly on end-product testing". It goes on to say, "efficient and accurate record keeping is essential to the application of a HACCP system … HACCP procedures should be documented".

Throughout the industry, Europe-wide, with the active encouragement of regulators, ranks of consultants, and the entire food safety establishment, common-sense controls have been ditched in favour of chasing paper records to an almost absurd degree. But the system is not a matter choice - food operators must implement it, on pain of criminal penalties.

Strictly speaking a properly designed HACCP regime might take account of supplier fraud, but the regulatory fashion was to rely on paper. In this context, it would have been entirely normal for Comigel to have relied on paper records to attest to the provenance of its supplies. Furthermore, any such reliance would have been approved by national regulatory officials, and endorsed by Commission inspectors from the EU's Food and Veterinary Office (FVO).

A decade ago, I remember a stormy, ill-tempered meeting in the offices of a major multi-national food processor in Ghent, arguing against full adoption of the HACCP system, calling for the retention of routine checks, and inspection-based systems. My only ally was a deliciously angry French manager who argued that the firm should go into the paper business and stop making meat products if HACCP was to reign supreme (Ironically, it later pulled out of meat processing).

During a factory "walk through", I was able to prove my point when I spotted a major contamination hazard that had not been detected – and not noticed by any of the group I was with - even though the process have been fully approved and certified. The Dutch managing director agreed my point, expressing real regret that he could do nothing about it. He was under instructions from the corporate head office to adopt the system.

Furthermore, within EU law and the Single Market, it is not possible to stand aside from the crowd – everyone must compete on a "level playing field". This also applies to the regulators. If they demand something different or extra, they are exposed to accusations of creating barriers to trade and distorting competition between food business operators in different Member States.

Here again, Mr Borg cannot walk away and suggest that enforcement of the system is the responsibility of national authorities.  It is here that the FVO exerts its malign effect.

The Commission's very own private food police sally forth to inspect national control systems, ensuring that national regulators properly implement the HACCP mantras, and conform with EU regulations. It they depart from the orthodoxy, they are quickly brought into line. Thus, the Commission itself is largely responsible for the way the law is enforced, as well as for the law itself.

And once the HACCP "virus" got embedded in the system, and regimes were approved by FVO inspectors, we then spawned a generation of "auditors" to replace hands-on inspectors. No longer, as Lord Haskins recently complained, do they check the factories. They spend their time checking that form-filling systems are in place, and that the right ticks fill the right boxes.

Since then, such skills which were in any event in short supply have been largely lost. The modern hygiene practitioner spends so much time with keyboards and flow charts that observational skills have atrophied and inspection techniques have been lost.

Thus, consumer affairs minister Benoit Hamon needs to wake up to the reality of what the EU has brought to his domain. This crisis is the child of the EU, the inevitable consequence of ten years of policy implementation that has seen the progressive dismantling of tried and tested systems, and their replacement with "Single Market compliant" regimes that have opened the way for a single market in crime.

The irony is that there are now so few people around with knowledge and understanding of how systems used to work and should work, that the crashing failure of the EU regime is scarcely recognised for what it is - not least by the regulators themselves, and especially the media.

But, unrecognised or not, there is no disguising the failure. It is there, daily, in the headlines. The system failures are there to see, even if people don't have the first idea of where the real blame lies.