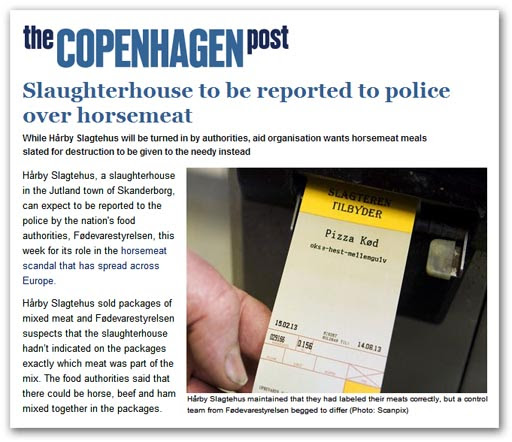 As the "colleagues" assemble in Brussels today to discuss measures to deal with the horsemeat fraud, we see the effects of the media treating this as a food scare rather than massive international fraud exploiting failures in the EU's regulatory system.

Instead of a widespread, international police investigation, to track down the criminals in a multi-million pound fraud, we are entering what is more like the classic final stage of the scare dynamic, the so-called "regulatory aftermath", with the politicians braying for more legislation to fix the problem.

In this case, they are calling for "speedier action on introducing country-of-origin labelling for processed beef and other meat products" – or so says the loss-making Guardian, as if putting different labels on packs is somehow going to prevent fraudsters adulterating the food which goes into the packs.

Meanwhile, the sainty, law-abiding Danes have discovered that one of their own has been doing naughty things.

Hårby Slagtehus, a slaughterhouse in the Jutland town of Skanderborg, we are told, can expect to be reported to the police by the nation's food authorities, Fødevarestyrelsen, after it sold packs of mixed meat without indicating which meat was part of the mix. The food authorities said that there could be horse, beef and ham mixed together in the packs.

Hårby Slagtehus maintained that the restaurants it supplied with meat were aware that the meat, which the slaughterhouse sold under the labels of 'pizza meat' (pizzakød) and 'formed beefsteak' (formede bøffer), could contain horsemeat.

Fødevarestyrelsen went to six customers of the slaughterhouse and all said they thought they were purchasing beef. A control team took a total of nine samples from the six restaurants and found traces of horse DNA in three of the tests, traces of pig DNA in one sample and a combination of horse and pig DNA in five of the samples.

But while the Danes are putting their hands up – albeit to minor infractions – the Poles are rejecting allegations that they are involved in the scams.

Agriculture Minister Stanislaw Kalemba claims that: "Poland is so far clean as a whistle. Poland is off the hook", stating that nationwide inspections have failed to find existence of horse in beef products.

He also takes a pop a the Sunday Telegraph for claiming that "Polish authorities" suspect that horses are being used in a form of money laundering, noting that no official from Poland is quoted as saying so. Kalemba says that the original allegations coming from Ireland were "unfair" and that "there are at least a dozen countries in Europe and South America under suspicion" of adulterating beef with horse. 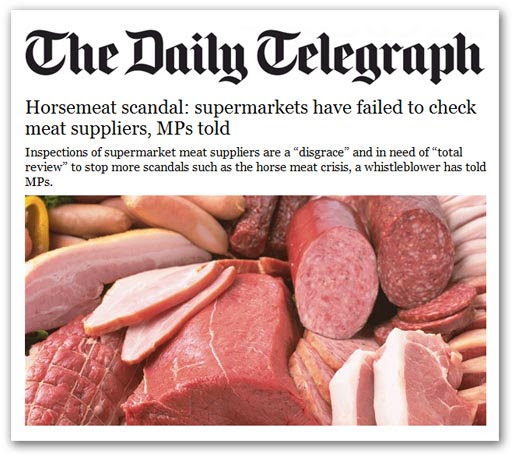 Back in Britain, the Daily Telegraph is getting excited over a report from Paul Smith, a retired auditor of food safety standards, that there is a "massive failure" of retailers to monitor their suppliers and have their meat inspected at "appropriate intervals".

Had the paper been reading this blog (and the Booker column), they would have already known this. We had, after all, written on 8 February (our very first piece on the current crisis) that the supermarkets operate what is known as "plausible deniability". As long as they have the paperwork to say they are in the clear, they are happy, we wrote.

Needless to say, in recounting Smith's "evidence" - which takes the form of a written statement to the Commons environment committee - the Telegraph omits any mention of the European Union, despite it having exclusive competence in food law.

Smith is cited as saying: "The whole system is a disgrace and in need of total review", and that he has spoken out to help bring about "appropriate changes so as to ensure the horse meat incident and related incidents do not reoccur".

But, since we have yet to work out the detail of what has been going on, with all sorts ofcomplexities and inconsistencies, we really should be focusing on the investigation - whence, of course, it will fall to the EU to take action.

As it stands, the "colleagues" seem to be rushing to slam closed the wrong door, long after the horse has been slaughtered. But then, you cannot expect them to admit their own failures.