EU politics: the silence of the media 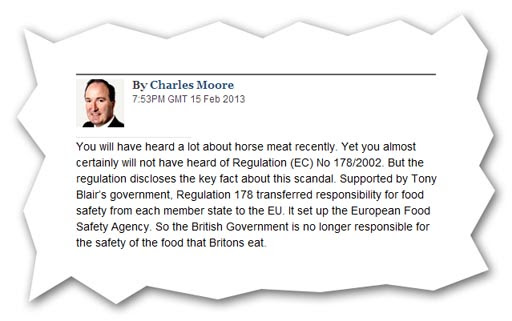 "You will have heard a lot about horse meat recently" writes Charles Moore in today's Daily Telegraph, something of an understatement, you might think. "Yet", he goes on to say, "you almost certainly will not have heard of Regulation (EC) No 178/2002".

That, of course, is true of the majority of people who rely on the legacy media for their information, but readers of this blog were told about it last Sunday, with a reminder through the week.

The regulation, writes Moore for the benefit of his less-informed readers, "discloses the key fact about this scandal. Supported by Tony Blair's government, Regulation 178 transferred responsibility for food safety from each member state to the EU. It set up the European Food Safety Agency. So the British Government is no longer responsible for the safety of the food that Britons eat".

This brings on confession time for Charles Moore, who admits that: "We in the media do not really want to focus on this fact, because it is more fun to hunt down and blame a British minister".

We have seen this throughout that last week, and indeed in Parliament where Labour MPs – from the same party which in government approved Regulation 178/2002 – have been desperately seeking to pin the blame for the scandal on Owen Peterson and his team.

As for the media, they are still at it in the very paper for which Mr Moore writes. Its editorial todayseeks to draw lessons from the scandal, but not once mentions the role of the EU.

In like mould, the Daily Mail offers: "The unpalatable truth: The horsemeat scandal is a brutal warning that Britain MUST change its ways". This is the paper that turned down the offer of an exclusive interview with Owen Paterson, only to have Dominic Sandbrook write two thousand words on the scandal, also without mentioning the EU.

With not the trace of a blush, Sandbrook tells us that the horsemeat scandal is one of those appalling stories from which nobody emerges well: "Certainly not the suppliers, some of whom will surely face criminal charges. Not the Food Standards Agency, which has proved embarrassingly passive. Not the supermarkets, whose obsession with profit margins has seen them drive prices and standards into the gutter".

His main target, though, is the "Great British public, whose love affair with cheap meat means we have effectively colluded in our own deception". Thus, with the EU not even on the horizon, Sandbrook could not begin to address the failure of the EU's regulatory model. He keeps his newspaper narrowly focused on its "little England" agenda, it having learned absolutely nothing from the events of last week.

Strangely, UKIP – which one might have thought would be shouting from the rooftops that food control is an exclusive EU competence, but all we seem ot have is one press release on the subject, that does not even seem to be on the UKIP website.

Back with Charles Moore, having launched his bombshell, he goes on to discuss the role of Downing Street in this affair and generally. "Horse meat provides only the latest example of the problem about how we are governed just now", he writes. "Everything seems very hard to do. No one really backs up anyone else. Authority does not lie where people think it lies".

For the sentiment expressed in that last sentence, the media bears a great deal of responsibility. And in a week of tumultuous publicity about an issue that lies within the exclusive competence of the EU, the general media not only seems to have learned nothing, it evidently wants to know nothing of how we are governed.

Still less is it prepared to tell the British people anything of such matters.