Booker: when the lights go out 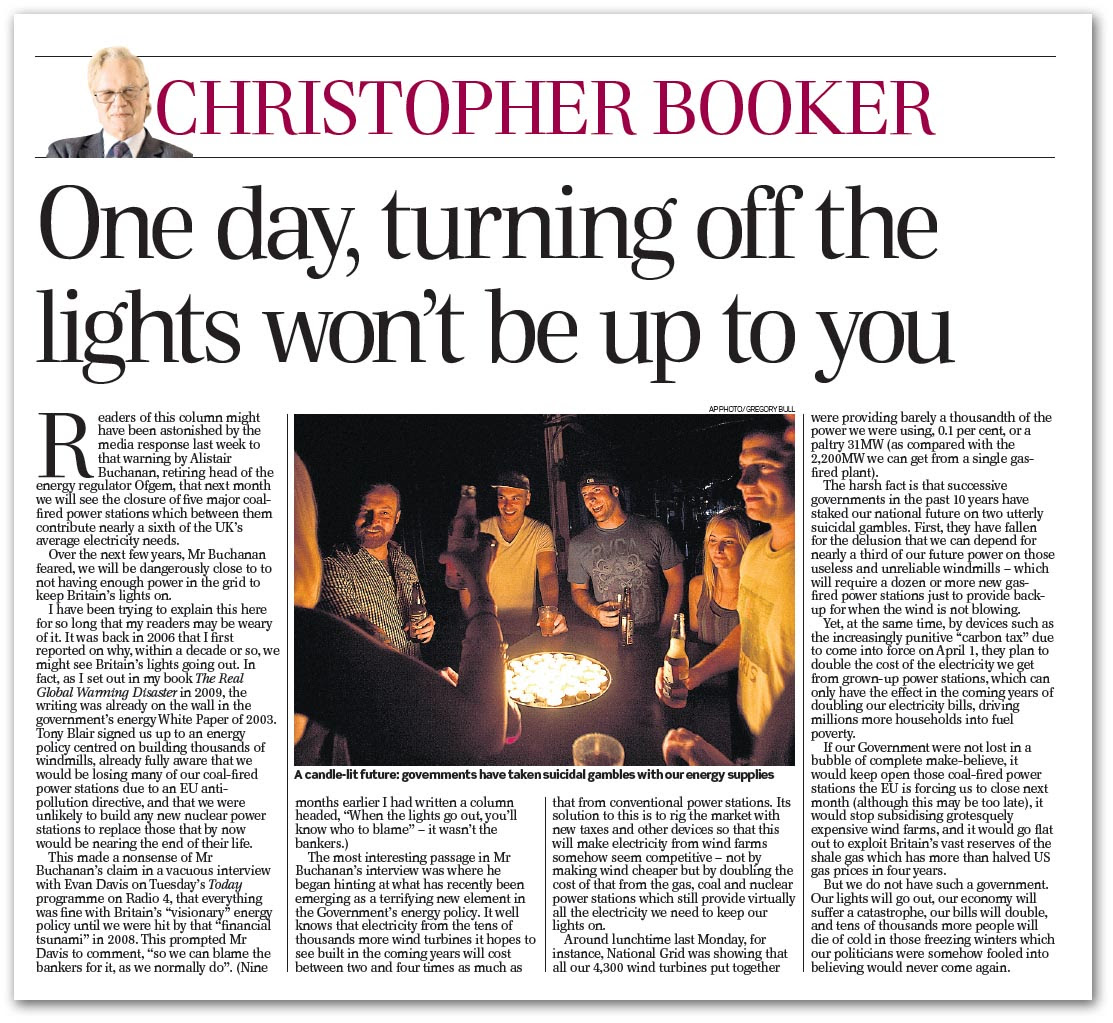 Booker's readers will not be surprised to find him writing in today's column on the media response to that warning by Alistair Buchanan, retiring head of the energy regulator Ofgem.

With the closure next month of five major coal-fired power stations that between them contribute nearly a sixth of the UK's average electricity needs, over the next few years, Mr Buchanan feared we will be dangerously close to not having enough power in the grid to keep Britain's lights on.

Booker, like so many of us, has been trying to explain this for so long that his readers may be weary of it. It was back in 2006 that he first reported on why, within a decade or so, we might see Britain's lights going out.

In fact, as he set out in his book, The Real Global Warming Disaster, in 2009, the writing was already on the wall in the government's energy White Paper of 2003.

By then, Tony Blair had signed us up to an energy policy centred on building thousands of windmills, fully aware that we would be losing many of our coal-fired power stations due to an EU anti-pollution directive, and that we were unlikely to build any new nuclear power stations to replace those that by now would be nearing the end of their life.

This made a nonsense of Mr Buchanan's claim in a vacuous interview with Evan Davis, on Tuesday'sToday programme on Radio 4, that everything was fine with Britain’s "visionary" energy policy until we were hit by that "financial tsunami" in 2008.

This prompted Mr Davis to comment, "So we can blame the bankers for it, as we normally do". (Nine months earlier Booker had written a column headed, "When the lights go out, you’ll know who to blame" – it wasn’t the bankers.)

The most interesting passage in Mr Buchanan's interview was where he began hinting at what has recently been emerging as a terrifying new element in the Government' s energy policy.

It well knows that electricity from the tens of thousands more wind turbines it hopes to see built in the coming years will cost between two and four times as much as that from conventional power stations. Its solution to this is to rig the market with new taxes and other devices so that this will make electricity from wind farms somehow seem competitive.

This is the infamous "green paradigm". The aim is not to make wind cheaper but to double the cost of electricity from the gas, coal and nuclear power stations that still provide virtually all the electricity we need to keep our lights on.

Around lunchtime last Monday, for instance, National Grid was showing that all our 4,300 wind turbines put together were providing barely a thousandth of the power we were using, 0.1 percent, or a paltry 31MW (as compared with the 2,200MW we can get from a single gas-fired plant).

The harsh fact is that successive governments in the past ten years have staked our national future on two utterly suicidal gambles. First, they have fallen for the delusion that we can depend for nearly a third of our future power on those useless and unreliable windmills – which will require a dozen or more new gas-fired power stations just to provide back-up for when the wind is not blowing.

Yet, at the same time, by devices such as the increasingly punitive "carbon tax" due to come into force on April 1, they plan to double the cost of the electricity we get from grown-up power stations, which can only have the effect in the coming years of doubling our electricity bills, driving millions more households into fuel poverty.

If our government were not lost in a bubble of complete make-believe, it would keep open those coal-fired power stations the EU is forcing us to close next month (although it may be too late), it would stop subsidising grotesquely expensive wind farms, and it would go flat out to exploit Britain's vast reserves of the shale gas that has more than halved US gas prices in four years.

But we do not have such a government, says Booker. Our lights will go out, our economy will suffer a catastrophe, our bills will double, and tens of thousands more people will die of cold in those freezing winters that our politicians were somehow fooled into believing would never come again.

The bizarre thing is that, according to The Daily Telegraph in May 2010, this wasn't going to happen. But, now it is, the politicians have some explaining to do.
COMMENT THREAD
Posted by Richard at 09:37