Horsemeat fraud: as much a crime as stealing diamonds

As things calm down here somewhat, the focus of the horsemeat fraud moves to Germany where, it appears, not one but several plants have been implicated in the beef adulteration.Yesterday we saw the reports of Schypke, with its state-of-the-art factory in Mühlen, being implicated, but that wasn't the first. There was already another plant implicated, the Vossko GmbHfactory, at Ostbevern, also in North-eastern Germany (pictured above). Initially, the situation was more than a little confused, as the early reports had the retailers Aldi and Lidl finding horse meat in tinned pasta and goulash as well as fresh pasta on sale in Germany and Austria. To cut a very long and somewhat tedious story short, though, the action moved to Switzerland, and the Swiss Co-op, which confirmed that its own brand lasagne had been produced by Comigel, the firm at the heart of the scandal. There the trail might have stopped, but for the fact that it emerged that the Co-op found other products adulterated with horsemeat, and on Monday, along with several other retailers – including Lidl – removed nine further items produced by the Liechtenstein firm Hilcona.It now transpires that the offending products were made by Vossko, which has admitted responsibility, with positive horsemeat samples having been reported by the Austrian Agency for Health and Nutrition Safety (AGES). The Swiss authorities found four products positive for horsemeat. The plot now thickens in that the Swiss retail outlets which have been found to have sold products containing unlabelled horsemeat are facing calls for legal charges to be brought against them for negligence. 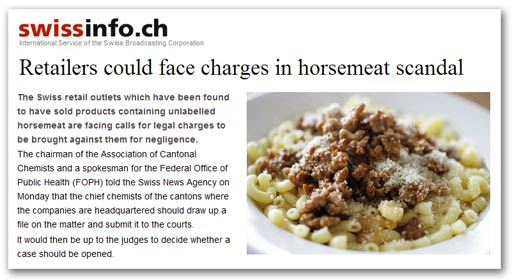 This comes from the chairman of the Association of Cantonal Chemists and a spokesman for the Federal Office of Public Health (FOPH). He told the Swiss News Agency on Monday that the chief chemists of the cantons where the companies are headquartered should draw up a file on the matter and submit it to the courts. It would then be up to the judges to decide whether a case should be opened.

This is in marked contrast to the treatment of the retailers in the UK. Here, under the Food Safety Act 1990, it is a criminal offence to sell food which is not of the "nature, substance or quality demanded", and it is open to local authority trading standards departments to prosecute those companies which sold adulterated products.

So far, we have not heard anything of the intentions, but it seems possible that there is some reluctance to proceed with an expensive prosecution when the retailers can invoke the "due diligence" defence. All they have to do is prove that they "took all reasonable precautions and exercised all due diligence to avoid the commission of the offence".

As with the Swiss, it would be interesting if the judges were involved over here, not least to test whether the "plausible deniability" which forms the basis of supermarket control regimes would stand up to scrutiny.

On the wider front though, we now have good evidence of five separate plants producing adulterated products, still further reinforcing the view that we are dealing with an epidemic of fraud.

And while there are siren voices suggesting that none of this is very important, the scale of the criminal activity is easily equivalent to the Brussels airport diamond heist. Food adulteration is every bit as much theft as stealing precious stones. Why rob a bank when you can make more flogging dead horses?