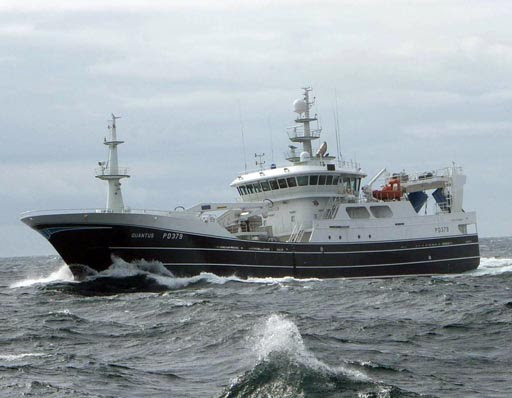 When Booker and I started working together back in 1992, we spent a lot of time on agriculture and fishing, these being the victims of the two most fully-developed EU policies – and the most catastrophic.

Part of our reasoning was that these industries were the "canaries down the mine". What happened to them could be taken as an example and a warning of what was to happen to the rest of us.

What I certainly didn't bargain for, more than 20 years later, was how completely the two industries would disappear from the popular media, so much so that the depredations of the EU would seem like history, unattached to current reality, while contemporary hacks and politicians would know next to nothing of the background.

Reflecting the almost complete lack of understanding of the fishing industry is the tendency in any fishing dispute to "fly the flag", as in the current "Mackeral War", supporting our own against the "johnny foreigner" - the Faroese and the Icelanders.

In so doing, however, this is standing up for the Scottish pelagic fleet which, contrary to the image of the hard-pressed, struggling fishermen, is a tiny exclusive "club" of multi-millionaire owners, running modern, 2,000-ton plus, super-trawlers, with starting prices of £20 million.

This is also an industry writ through with criminality, of which last year's "black fish scandal" is reckoned to be only the tip of the iceberg, where thousands of tons of illegally caught herring and mackerel were landed, at a value variously estimated at up to £100 million. 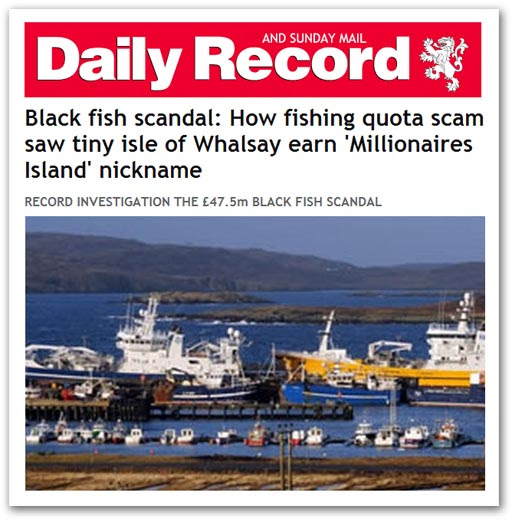 Then, 17 skippers, mostly from the Shetland island of Whalsey admitted to specimen charges, covering the landing of illegal catches worth £47.5 million, after living lives of luxury, splashing out on "holiday homes and flash cars".

This is an industry driven by greed, and one which, unlike the whitefish fleet, has profited hugely from the EU's Common Fisheries Policy (CFP). Unsurprisingly the Scottish Pelagic Fishermen's Association (SPFA) with its 27 member vessels has been vocal in its support of the EU, even while the rest of the fleet has been driven into bankruptcy.

Multi-millionaire Association Chairman, Alex Wiseman, and co-owner of Kings Cross pelagic vessel, weeps tears for The Sunday Telegraph. "This is our way of life, and if you suddenly tell us we can only catch a small fraction of what we previously relied on, then you will kill us all off", he says. "People won't go bankrupt overnight, but they will sell up, and businesses owned by the same family for generations will fold. It's really frightening".

Yet Wiseman was one of the 17 skippers successfully prosecuted in the "black fish" fraud, a highly sophisticated operation that involved not just the skippers of Shetland and north east pelagic trawlers, but the vessel's agents and the fish factory itself, described by presiding judge Lord Turnbull as "an episode of shame" for the industry.

The pelagic industry generally has also been guilty of the notorious practice of high grading, discarding hundreds of thousands of tons of fish to optimise the value of the catches brought back to port.

This is a practice that is supposed to have been banned, but is still routinely carried out on a colossal scale. White fish skippers fishing three hours steaming North West of the Butt of Lewis, in an area called the Horse Shoe, and the Sulesger Bank, are currently reporting major problems. Some have struggled for 10-12 hours to retrieve nets after scooping up tons of rotting mackerel from the sea bed, dumped by pelagic boats. Others have lost their bag ends altogether.

But, despite landing record catches, with the value of fish landed in Shetland increasing to a new record of over £90 million during 2011 and records set in Peterhead, the pelagic skippers still want more. Theirs is the industry which is the most voluble in demanding sanctions against the Faroe Islands and Iceland, despite the potential adverse effects on the British fish-processing industry.

In thrall to this tiny, but wealthy sector of the Scotish fishing industry, we have thus seen Scottish fisheries minister Richard Lochhead picking up the call for sanctions, even though the predatory behaviour of Norway and the EU renders their imposition problematical, to the point where they could hardly be applied.

One also needs to remember that, at the heart of the Mackerel dispute is the fact that these fish have moved north into Icelandic and Faroese waters. The effects of this were spelled out yesterday in the Irish Times. There,  Sigurgeir Thorgeirsson, Iceland's chief fisheries negotiator spoke of some 1.5 million tons of mackerel moving into his country's waters last summer, consuming an estimated three million tons of food.

"We have quite a greedy guest in our coastal zone", says Thorgeirsson. "A six-year-old mackerel arrives weighing 300g and its weight rises to 500g from eating krill, crustacea, herring and even sand eel". The mackerel invasion is even being blamed for a marked decline in the number of seabirds, including the much-loved puffin.

Thus, the Icelandic and Faroese governments both maintain that catching mackerel in their coastal zones is vitally necessary to restore the ecological balance. But such is the greed of the Scottish pelagic fishermen that they would have these countries, which depend on their fishing industries, prohibited from fishing in their own waters, so that they can maintain their own quotas.

From a broader perspective, in terms of jobs and value, the processing industry, with considerable capacity in Grimsby, is worth far more to us than a few wealthy Scottish boat owners. But, if they need to keep up the repayments on their over-sized boats, the best option is for their beloved EU to negotiate a share of the Faroese and Icelandic quotas.

If they are to have any chance of that, however, ministers would be best off calming down their rhetoric, and recognising that the Scottish pelagic fleet is not the centre of the universe. The Faroese and Icelanders have right on their side – and their track-record should tell ministers that they do not give in to bullies.