Booker: Owen Paterson gets a grip 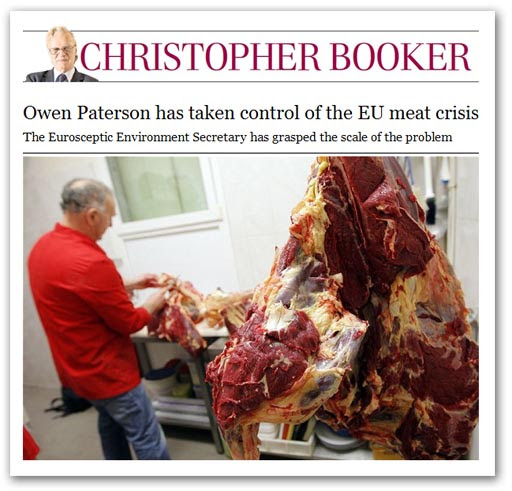 It is not like Booker to be kind to politicians but, as we have both watched the performance of Environment Secretary Owen Paterson over the last couple of weeks, we have both agreed that we were witnessing something exceptional. Interestingly, even Peter Oborne seems to agree.

Mr Paterson, he says, is the only politician to have emerged well from what is, in essence, a bogus political storm. His handling of this issue has been sensible and unflappable, offering all the right reassurances while refusing to panic.

Thus writes Booker in this week's column, the real drama behind the ongoing story which for the past two weeks has been leading the news across Europe has been almost wholly missed.

From the moment when, 10 days ago, Findus told the Food Standards Agency that it had found horse meat in beef lasagne packaged in Luxembourg, from meat processed in France after being bought from an abattoir in Romania, Owen Paterson, our Environment Secretary, has played a blinder.

While everyone else floundered about, chasing every little new bit of the scandal as it came to light from one end of the EU to another, Mr Paterson was the one politician who immediately grasped the nature and scale of the problem.

He saw what needed to be done and he marshalled all the key players, right up to the time when he instigated a top-level emergency meeting in Brussels on Wednesday evening, for himself and six European food ministers, to agree with the relevant EU Commissioner a Europe-wide plan of action that he was proposing to address the crisis.

What Mr Paterson recognised from the start, unlike any other politician in Britain, was that the root of the problem lay in what had followed when, a decade ago, the EU took over all "competence" to make food law from national governments.

It promptly introduced a new set of rules across Europe, to replace the old dependence on regular inspection and testing of foodstuffs with a radical new system. The EU's version of what is known as HACCP (Hazard Analysis and Critical Control Points) is based on a trail of paper, whereby any food product, as it passes along the chain from one firm to another, must be accompanied by a piece of paper certifying its nature and contents.

This system, set up under EU regulation 178/2002, was to be administered by a new European Food Safety Authority, represented in each country by "independent"national food safety agencies, such as that created in Britain in 2002.

But the regulation also laid down that ultimate responsibility for the reliability of food sold to the public was placed on the "food operators" at every step along the chain, culminating in those retailers who sell food to the public.

Mr Paterson became aware years ago, when he was on the relevant Commons committee, that this new system was wide open to fraud. Everyone along the chain was expected under the rules to trust the paperwork passed on to them.

But it only needed one firm to insert false information into the paper trail and the reliability of the system would collapse (as we have seen when horse meat correctly labelled on leaving a Romanian slaughterhouse was mis-labelled as beef after being exported to western Europe).

There has long been evidence to show that this fundamentally flawed system was being fraudulently exploited on a massive scale. In 2008, for instance, it was reported that huge quantities of Chinese rabbit meat imported to Bulgaria were being repackaged using falsified Argentinean health certificates, earning the criminals a profit of £18 million. The latest beef-for-horse switch is estimated to have netted a profit of half a million pounds, and the yearly cost of this and similar frauds at many billions.

All this, resulting from the wholesale abandonment of routine inspections and testing, was noted by the European Commission at the time, but it failed to take any serious steps to remedy such criminality because the potential for fraud was implicit in the very nature of the system that the EU had set up to regulate trading in food across the Single Market.

Now, at last, however, the horse meat scandal has exposed the central flaw in the EU system. And, as soon as it emerged, Mr Paterson began liaising with his opposite numbers in Ireland, France, Romania and other countries, and with the EU's new Maltese health commissioner, Tonio Borg, in Brussels.

Only three days after Findus reported its lasagne problem to the Food Standards Agency, he met those senior representatives of Britain's food industry whom he had summoned to his office on a Saturday morning.

He reminded the food operators present that, as EU law dictates, they had ultimate responsibility for the labelling and contents of their products, instructing them to carry out tests on all their stock and to report back within six days. The results would be published on Friday.

Last Tuesday Mr Paterson reported to the Commons all he had done, only to be beset on all sides by MPs demonstrating their ignorance of the fact that food law is now a full "EU competence". Two of the most lamentable contributions came from two MPs who had worked for the EU in Brussels.

The Labour spokesman Mary Creagh, her face screwed up with self-righteous rage, was so determined to blame Mr Paterson for what she imagined was his failure to respond to the crisis that she merely demonstrated that she hadn't got a clue what she was talking about.

Anne McIntosh, chairman of the Commons' food committee, despite having been a Tory MEP for ten years, had already been calling on Mr Paterson to impose a ban on imports, unaware that such a ban can only be imposed by Brussels on food safety grounds.

Much of our media, alas, seem to understand the workings of our EU system of government no better than the politicians. When Mr Paterson explained to Andrew Neil on television that food law is now "an EU competence", it was reported by The Observer that he had attacked "EU incompetence". This misquotation was repeated by other newspapers, including The Times.

On Wednesday, leaving Ms Creagh and other MPs still yapping at his heels in another debate, Mr Paterson travelled to Brussels to join his counterparts from six countries, including Ireland, France, Romania and Luxembourg, in a friendly "summit" with Commissioner Borg, which agreed to all the steps Mr Paterson was proposing.

These ranged from regular EU-wide testing of food products, of the type which the flawed system had eliminated, to bringing in Europol, which Britain had already, on Mr Paterson's initiative, been the first country to contact.

On Thursday morning, having driven up to The Hague, Mr Paterson had an equally helpful meeting with Europol's senior officials, who were delighted to be involved in fighting a fraud scandal which Europol and Interpol had done their best to flag up 15 months previously.

So we have the irony that it has been the most strongly Eurosceptic member of the British Cabinet – also a speaker of several European languages – who is now leading the EU out of a catastrophic mess it has brought upon itself, by creating a system so ill-conceived that for years it has been a disaster waiting to happen.

Yet, at the same time, this dismal episode has again shown just how ignorant of how our EU system of government works are the very people who most pride themselves on being good "Europeans".

The finest irony of all is the way politicians such as Ms Creagh and papers such as The Observer are so blinded by their infatuation with a vague and make-believe idea of "Europe" that, in reality, they are no more than hopelessly blinkered "Little Englanders".