Horsemeat scandal: ramping up the scare 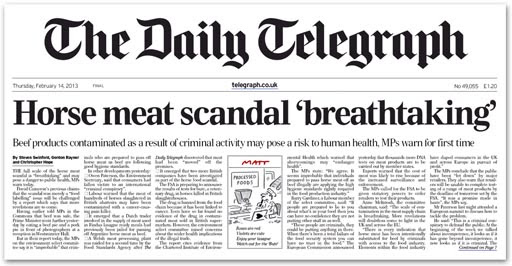 The one thing you can guarantee about the food "scare" is that the moment the issue hits the headlines, a legion of agenda-pushers will come crawling out of the woodwork, all trying to ramp up the tension for their own purposes.
Some of this is clearly mischief-making, as we see in The Daily Telegraph today, its front-page lead going for the scary headline, while the content is incredibly thin. The report is flagging up the EFRA Committee report now available, with Anne McIntosh and her committee airing their lack of grasp of the issues. I've been without internet most of the morning, so I've been playing catch-up, having to read the report on the fly. From it, one sees that it is an interim report, and the inference is very clear, that this is a cheap attempt to grab some headline from an issue of topical concern.Watching Miss McIntosh in Parliament does not inspire confidence in her grasp of the subject (any subject) and her manifest inadequacies certainly show in her work. She and her committee have almost nothing to contribute to the understanding of the issues, illustrated by an extract from the conclusion of her current report, which grandly declares:

While this is primarily a food labelling issue, the suggestion of fraud on a massive scale, suggests that measures must be put in place now to prevent any further contaminated meat entering the food chain. The Government will need to consider its role in achieving the correct balance between affordable food prices and regulations that ensure transparency and quality.

The report then goes on to say:

We are concerned that the consumer will be caught in a Catch 22 between paying the costs of higher traceability, labelling and testing standards or having to accept that they will not be provided with comprehensive information about the provenance and composition of the food that they eat. The strong indications that people have intentionally substituted horsemeat for beef leads us to conclude that British consumers have been cynically and systematically duped in pursuit of profit by elements within the food industry.

What the MPs have not seemed fully to register is the criminal nature of the problems we are confronting. This is primarily an issue of food fraud. All the labels, traceabilty and systems come to nothing when criminals systematically target the weaknesses and exploit them.Here, McIntosh and her crew need to lift their sights. As food fraud, this current example has involved adulteration of beef with horsemeat. But, it could just as easily have been substitution of any food (or ingredient) by any other – and it very often is.Thus, a narrow focus on one particular commodity, or one tiny section of the food industry, is going to miss the point. As soon as procedures are tightened up in this sector, the criminals will move on to another product, and another weakness - and even to a completely different, i.e., non-food sector.Thus, this should not be looked at primarily as a food safety issue, nor even a food standards issue, per se. We are looking at criminal enterprise, involving billions annually. It has suddenly come to prominence with this product, but that simply reflects the current criminal target. Sorting the narrow issues will not solve the bigger problem.COMMENT: "HORSEMEAT" THREAD
Posted by Richard at 14:26