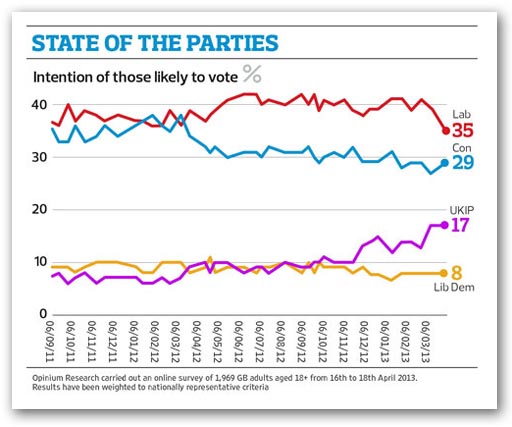 Political attention is now turning to the forthcoming local elections but, so little discretion do local authorities have in the way they run their affairs, that the votes will have little relevance. In the main, we are simply voting for the people who will do the bidding of our superior governments – national and supranational.It is no surprise, therefore, that the elections tend to be treated as a large-scale opinion poll, in anticipation of which the Observer has published its own poll. This finds Labour on a mere 35 percent with the Tories "still in the doldrums" on 29 percent. Labour's shrinking lead was the subject of a recent piece in the New Statesman, whence it noted Peter Kellner's observations that no modern opposition had ever won a general election without being at least 20 points ahead at mid-term (below).

By this measure, the Tories should romp home at the general, but New Statesman argues that the right is divided and the Lib-Dem vote is likely to collapse in Tory-Labour marginals.

The "right", in this context, is taken to include the bulk of UKIP voters and, with the current poll putting its support at 17 percent, the greater effect of the UKIP vote is expected to drag down the Tory vote and open the way for Labour. With displaced Lib-Dem votes going to Labour in greater numbers, one can therefore expect Labour to do better than the modest poll lead indicates.

Another distorting factor is the turnout which, if it follows present trends, should be at an all-time low for the forthcoming local elections, and possibly also for the general. And recent observations suggest that low turnout tends to favour those who are best able to organise the postal vote – most often the incumbent.

Despite the uncertainties, though, the media still has difficulty in widening out the elections beyond the two party (plus one) system, thus like The Sunday Times reporting in terms of wins for the establishment parties.

This paper thus has details of an analysis carried out Colin Rallings and Michael Thrasher of Plymouth University, suggesting that Labour will gain 350 council seats, while the Tories will lose 310 and the Liberal Democrats 130. Nevertheless, they concede that, with UKIP in the field, this is the "most unpredictable local contests for years".

The Sunday Telegraph, on the other hand, goes for a more lurid projection, suggesting that the Tories could lose as many as 600 of the two thousand-plus seats up for grabs. It takes the Sunday Mirror to talk up the role of UKIP, retailing fears that many of the Tory votes will go to UKIP, putting the overall losses at 500 seats.

A guessing game on the number of seats won or lost, however, seems to be the extent of the media sophistication. One can understand, therefore, why the Italian Five Star Movement is moving towards the idea of direct democracy, restricting the powers of elected representatives.

Until something more fundamental such as this is on the agenda, the elections will increasingly become an empty numbers game – and one that attracts less and less interest and excitement. Even the politicians, it seems, are having difficulty drumming up enthusiasm, and if they can't get worked up, it is unlikely that the rest of the population will follow.