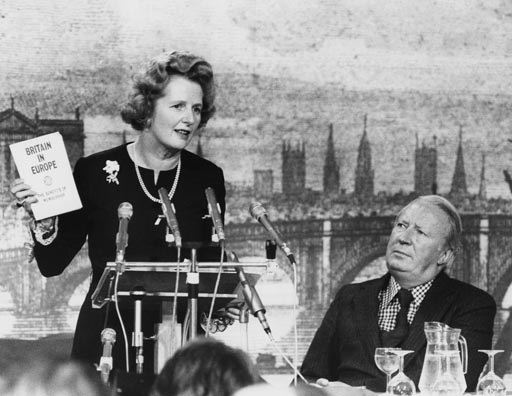 For all her virtues, one should not forget that the then Mrs Thatcher led the Conservative Party "yes" campaign in the 1975 referendum, with the evident approval of Ted Heath (above). She saw the lighteventually, but not before she had assented to the Single European Act.Thatcher herself failed to see its significance, declaring to the Commons after she had returned from Luxembourg, where the treaty had been agreed:

I am constantly saying that I wish they would talk less about European and political union. These terms are not understood in this country. In so far as they are understood over there, they mean a good deal less than some people over here think they mean.

But if Thatcher was not on her guard, neither was Parliament. When the Act came to be ratified, the necessary Bill amending the European Communities Act 1972 was pushed through a thinly attended Commons in just six days. The main debate was scheduled to begin on a Thursday, in the knowledge that MPs would be reluctant to see it prolonged lest it encroach on their weekend. After only three sessions of the Committee Stage, the Government abruptly curtailed any further discussion by passing a "guillotine" motion. On the final reading, so few MPs turned up that the Bill was passed by a mere 149 votes to 43. Apart from a tiny minority from both Labour and Tory benches, few MPs appreciated that this was what even Hugo Young would later agree was a "major constitutional measure".Peter Tapsell, an unrepentant eurosceptic who within a few years would be prominent in opposing the Maastricht Treaty, later spoke for not a few of his colleagues in recalling how they had eventually become "ashamed" at having voted for it. "We really didn't give it the attention we should have done", he said.

Whatever criticism there might have been of Margaret Thatcher, she was not on her own.