Thatcher: end of an era 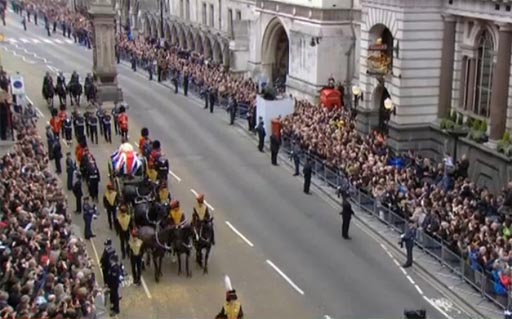 In the introduction to my blog on the Battle of Britain, called The Days of Glory, I observed that Churchill was still alive when I was born. He was to have a spell as prime minister as I grew up, too young then to understand what was going on. But, I also observe, that I was one of the hundreds of thousands who filed past his coffin after he had died, and I watched his funeral. You really did, I wrote, then have a sense that an important moment in history had passed. That same sense pervades with the funeral today of Margaret Thatcher, the passing of an end of an era. I have to say though, with the funeral procession taking the same route as Churchill, comparisons are invidious. By contrast, her send-off was a sorry little thing (below). 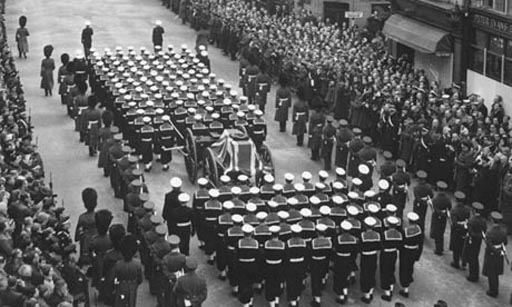 In a way, though, that is entirely fitting. Churchill was the last prime minister of Empire, and even in 1965 the United Kingdom enjoyed the remnants of power. Almost exactly twenty years later, defence cuts and a retreat from Empire had reduced the Armed Forces to a rump, that had difficulty assembling a task force to deal with the third rate power in one of our last, far-flung outposts.

The Falklands War, however – fortunately a success, but a close-run thing – was the making of Margaret Thatcher, more so even that her contest with Arthur Scargill and his miners. This was a good, "clean" victory, where the bands could play, and the flags could wave, and we could feel good about being British again.

But that, probably, was also the last time. The true legacy of Margaret Thatcher, was the Single European Act, which presaged a huge leap forwards in European political integration, Part I of a treaty of the European Union, the second part of which was to follow during John Major's tenure, as the Maastricht Treaty.

This was followed in short order by the wave of new EC directives aimed at the "completion of the Single Market", unleashing a torrent of regulation that brought Booker and I together, and had Major turning to Michael Heseltine, the great europhile, to launch a "deregulation" initiative.

In the nature of things, the trauma and disruption to so many business, which Booker and I were to record, was attributed to John Major, all within the context of deteriorating relations with what was to become the European Union. The foundations, though, were laid by Margaret Thatcher, with her agreement to the Single European Act. The damage was done then, and continues to this day.

By 1988, when Thatcher started to recant, giving her ground-breaking Bruges speech, it was too late – the damage had already been done. And, in any case, December 1988 brought Edwina Curry and the salmonella-in-eggs scare, the first of a series of food scares which dominated the headlines for two years and more.

With these, from the administration led by the "free market" Margaret Thatcher, came a torrent of regulation and diktats, the scale of which we had never before seen outside of wartime. These gainsaid any credentials that Mrs Thatcher might have had as a business-friendly prime minister. When the chips were down, she reached for the law book, making her no different from the rest.

That, of course, is not to say that she was not a great lady, and she undoubtedly added to the gaiety of life, her achievements real and substantial. But, while the reputation of every great figure ends up blurred by countless myths, it is as well to acknowledge that, even for her friends and admirers, Margaret Thatcher was a mixed blessing.

As the memory of today's sad, diminished little procession fades, the greater legacy of Thatcher, for good and bad, will keep us troubled for many more years to come.