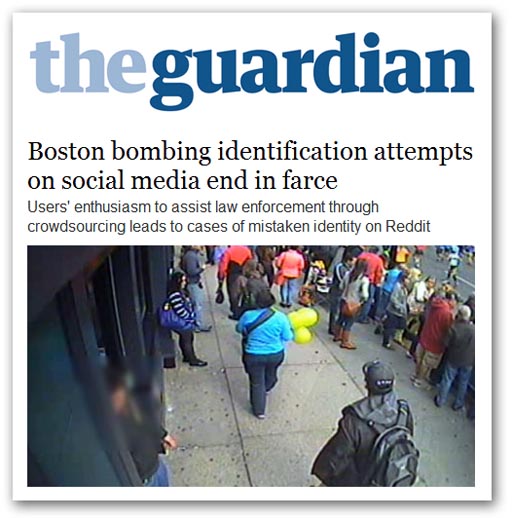 The detonation of lethal bombs in a public place is not enough to warrant major coverage. Otherwise, the recent attack on a café, packed with young people enjoying themselves and playing pool, killing 32 and injuring 65, would have been top of the news agenda.

As it was, this happened in Baghdad last Thursday, so it (and other attacks) barely got a mention in the media.

That the Boston Marathon bombs did secure such a torrent of media reports, therefore, is a result of other factors, not least the fact that the bombing occurred in an American city, and that such events in the United States are so rare. The early identification of the perpetrators, the lockdown of the city and the ensuing manhunt also added to the sense of drama, thereby intensifying the coverage.

As a result, the hunt for the bombers has also become a media event and the performance of the media has become part of the story, not least in terms of the comparisons between the social media and the legacy media. Networks, cable TV channels and online services were all competing for "news sovereignty" and, as Spiegel reported, Twitter had a lightning start, but there was a surprise winner.

In fact, star of the "show" was Pete Williams, justice correspondent for NBC, who trounced competitors CNN, Fox News and others, whose repetitious coverage was slated as boring and unoriginal.

To gain more information people thus turned to the social media, with Twitter making an early headway. Since the shootouts and the chase scenes were being played out in real time – just like a real version of the TV thriller series "24", this seemed the idea medium – eyewitnesses tweeting every second with updates seemed to have the march on the old, portly TV networks, long written off by many.

But, as the Guardian discusses, at some length, the social media failed entirely to make a mark, ending up confirming the branding as, "a million useless monkeys making a million useless speculations".

Citizen journalists became "self-deputised internet detectives", as one journalist called them, who then focused unwelcome attention on several people who, it soon emerged, had nothing to do with the bombings. Some of the speculation bordered on the farcical. One bag-toting presumed suspect, named "Blue Robe Guy" by users, was accused of such actions as "trying to look nonchalant".

But, says the Guardian, there were serious repercussions. A Moroccan-born 17-year-old, Salah Eddin Barhoum, and his friend, Yassine Zaime, were highlighted incorrectly as potential suspects on Reddit, and later on the front page of the New York Post. Barhoum's father said later he was worried for the safety of his son and the rest of his family.

Even when authorities issued pictures of the Tsarnaevs, without names, the potentially harmful tide of misinformation did not stop. Reddit users quickly, and wrongly, identified the younger of the pair as Sunil Tripathi, a reportedly depressed Brown University student who disappeared in March.

This lack of utility does not in the least surprise me. In April 2011, I tried to chart the progress of theStokes Croft riot in Bristol, trawling through thousands of "tweets" as an aid to building up the picture of what happened.

Despite the volume of material though, there was nothing of use. Mostly, it comprised people asking each other what was going on, speculating about what was happening, or reports of action without context or location detail – or even the correct timing - which rendered the information valueless.

In the end, it was a combination of blogposts, written after the event, together with YouTube videos and still photographs – with very little input from the legacy media – that enabled me to piece the story together.

The essence of this, and the more recent experience from Boston, seems to indicate that volume of information itself – whatever the source – does not a coherent story make. In between the events and the news "consumer", there has to be a guide, or interpreter, to sift the dross and to give shape and order to events.

In Boston over the most intense part of the manhunt, it was one television journalist – one amongst many who stepped up to the plate - when others failed. On other occasions – as in Bristol - it was bloggers,– aided by video camera footage and still photographs – some from professional photographers.

This, it is the "guiding mind", not the media, per se that makes the story – for good or bad. And that means that the anarchic form of media, such as Twitter and platforms such as Reddit, can never have any serious role in a complex and fast-moving story. Such media are most often the "noise" of the crowd. They should not be confused with journalism, and will never replace it.