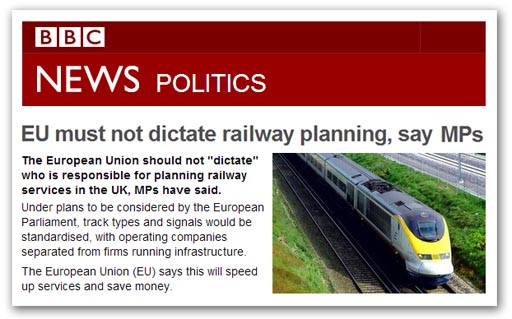 Ever since Directive 91/440/EEC of 29 July 1991, the EU (as it is now) has been interfering with the provision of rail services in the United Kingdom.

That was the Directive which required that a distinction be made between provision of transport services and the operation of infrastructure, with separate management and accounts for each of the two activities. The Directive also required railway undertakings and their groupings to pay for the use of railway infrastructure.

It was this Directive which led to the John Major's bodged privatisation in 1992, and the separation of the running of the railtrack from the train companies which used it, described by Simon Jenkins - asBooker later recorded -  as "the stupidest act of John Major's government".

With that, though, the EU had not finished. It produced additional directives and, after the publication of its "Roadmap to a Single European Transport Area" in March 2011, it followed through, culminating with the publication of its "Fourth Railway Package" in January of this year. This was aimed at "completing the Single European Railway Area to Foster European Competitiveness and Growth".

It is now a sign of the times that the House of Commons Transport Committee is brought into play to comment, but not on Whitehall's plans for the railway system – we have ceded the power to determine strategic legislation on transport to the EU. Thus, we get the Committee examining and reporting on the plans of our supreme government in Brussels - in particular the fourth railway package.

And it is from its report that we learn of MPs' disquiet over the EU's plans. Far from learning from its "mistakes" over the separation of infrastructure from operations management, the Commission is repeating them, seeking to increase the degree of separation. To that effect, it is proposing "common rules for a governance structure", in an attempt to make sure systems are completely separate.

Having already split our system, though, these additional requirements will have relatively little impact on the UK, but there are other changes tucked away in the current "package". Not least of these is extending the powers of the European Railway Agency, changes which are also intended to speed up the introduction of the European Rail Traffic Management System (ERTMS).

Little has been said of this enormously ambitious system, the implementation of which extends into 2024, about which there is a UK implementation plan but very little reliable cost information, with estimates of up to £6 billion.

Unsurprisingly, there is only one mention of ERTMS in the Transport Committee report, and that under "interoperability", with a reference to the "costly" standards. These are the subject of ongoing EU legislation, dated as recently as January 2012.

The devil is in the detail here, and that is not what you will find in the legacy media. In fact, apart from one report - by the BBC, and that at an incredibly superficial level (illustrated above) – the national media seems to have ignored the Transport Committee report.

Thereby is illustrated the harm done by ceding power to the EU. Because strategic planning of rail systems is now an EU competence, there is scarcely any UK political input and next to no public debate.

No one but a few specialists really know what is going on, and a whole tranche of government has become invisible to the media and the general public. Because the anonymous officials in Brussels are dealing with it, it is no longer our concern.