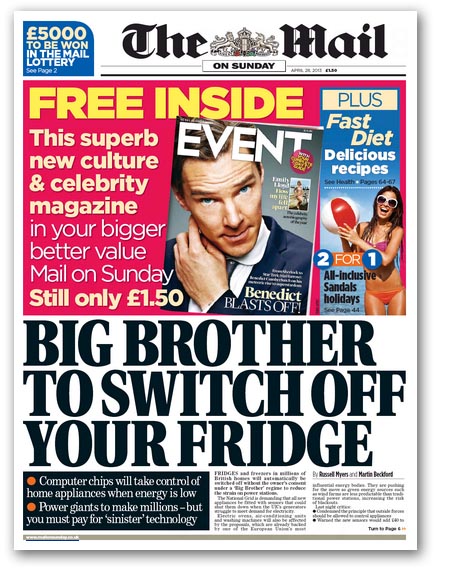 The Mail on Sunday, in its front-page lead today, has picked up on the role of "smart" technology in maintaining our failing electricity supply system.In particular, the paper is identifying the role of "smart" appliances, telling us that fridges and freezers in millions of British homes will be automatically switched off without the owners' consent under a "Big Brother" regime to reduce the strain on power stations.The National Grid, it says, is demanding that all new appliances be fitted with sensors that could shut them down when the UK's generators struggle to meet demand for electricity.Electric ovens, air-conditioning units and washing machines will also be affected by the proposals, which are already backed by one of the European Union's most influential energy bodies. They are pushing for the move as green energy sources such as wind farms are less predictable than traditional power stations, increasing the risk of blackouts.

To assist in explaining what is going on, we also have another piece, telling us that the smart technology will cost us billions – and thousands of lives. On top of Booker's earlier piece, and his more recent report, the message is beginning to get through that our masters are up to no good. 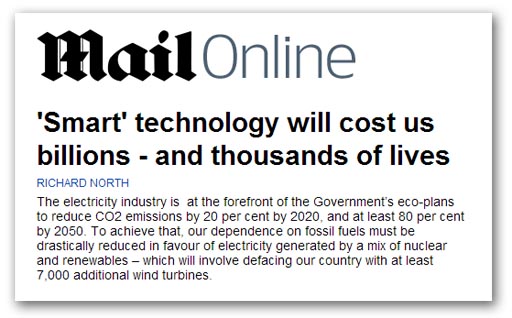 But with the Mail picking this up - and giving it the profile it deserves, we see a light shining on a dark corner of UK energy policy, as set out in September 2011 in a report to Defra entitled, "Delivering the Benefits of Smart Appliances" by EA Technology - for which £73,150 was paid.

Chillingly, this gave the game away, admitting that the principal drivers for change in the electricity industry related "to the wide ranging measures being implemented to reduce greenhouse gas emissions", and in particular, to "the increasing move towards the wide-scale deployment of time variable renewable generation, particularly wind generation".

Because of this, the report said, "No longer is it considered viable for electricity to be provided 'on demand' in response to the requirements of end-users". Rather, it said, "a co-ordinated approach is required whereby energy production and demand become integrated to ensure the use of renewables can be optimised whilst also minimising the use of fossil fired generation".

In other words, the primary objective of the electricity industry is not to meet demand, but to enable the optimum usage of renewables.  The huge cart is being run before horse.

This mess could be avoided, says the Mail editorial if we reintroduced rationality into our energy policy, cancelling the closure of perfectly serviceable power plants, building new gas and nuclear generators, and exploiting the shale gas which lies beneath our feet.

All that is needed is a return to sanity in the political class, which – if it understands nothing else – must see the cost and intrusion of the "energy-saving" scheme will be deeply unpopular with voters.  But, one might observe, when did voter sentiment ever have anything to do with it?