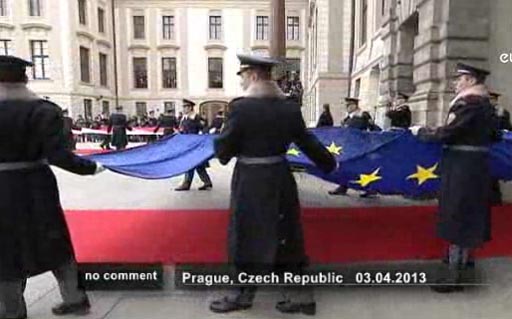 Before a smirking Barroso, history has been made in Prague, with the EU's symbol of oppression raised over Prague Castle. Throughout his tenure,Vaclav Klaus managed to keep the Castle free of the offending symbol, despite it appearing on every Czech ministry building, alongside the national flag.

To jeers and catcalls, however, the new Czech president, Milos Zeman, stood witness alongside the European Commission president as Czech soldiers ceremoniously wheeled out the EU flag, to the strains of Ode to Joy.

Not a few made comparisons between "puppet leader" Zeman and the Nazi collaborator Emil Hacha, the latter witnessing the raising of the Nazi flag over Prague Castle at the start of the Nazi occupation. Both events signify a loss of independence, which in the light of recent events is all too real.

That Barroso took the time out to come to Prague to witness this event says a great deal, the man presumably there to enjoy the moment when the writ of his "non imperial" empire was at last extended to the citadel at the heart of the Czech Republic.

For the rest of us, it was a sad moment.
COMMENT THREAD
Posted by Richard at 06:55