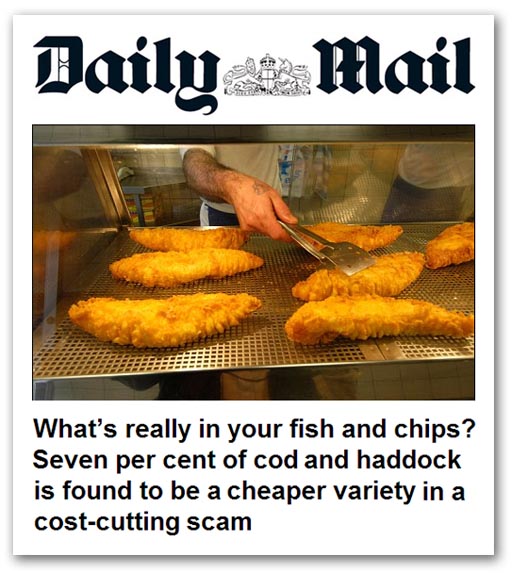 Ever since we learned of the US Oceana report, it was inevitable that, if a similar exercise was conducted here, we would also find a degree of fraudulent substitution.

And so it has proved to be, with "huge amounts of cheap fish are being passed off in Britain as more expensive varieties as consumers fall victim to a 'murky and complex' cost-cutting scam".

Research carried out by the University of Salford has found that seven percent of cod and haddock - the staple of British fish and chips - are being mislabelled in supermarkets, shops and restaurants in what the Mail calls "a worrying parallel to the horsemeat scandal".

This is, by comparison with the US, where 33 percent of samples were mislabeled, is a relatively modest amount. My guess is that if processed fish products, such as fish fingers and fish cakes, were looked at, the substitution rate would be found to be much higher

That is perhaps suggested by a similar study in the Republic of Ireland, which found that as much as a quarter of products were actually completely different species, while that figure rose to as much as a third across Europe as a whole.

Dr Stefano Mariani, a biologist at the University of Salford who conducted part of the UK study, says: 'We noted that there were some suppliers that were consistently handling fish that was proven to be mislabelled, which suggests that a lot of mislabelling occurs before the fish gets delivered to the supermarket".

He found that cod in Britain and Ireland was being substituted with cheaper fish like pollock and Vietnamese pangasius, which is farmed in estuaries in South-East Asia.

Scientists who have studied the issue, adds the Mail believe mislabelling of fish is too widespread not to be fraud. But, as we have highlighted earlier, there are retail buyers who are quite happy with the situation as it stands.

Interestingly, much of the world's supply of frozen fish is produced in China and significant quantities of Europe's produce is flown in via Frankfurt airport. But, as with horsemeat, no offence is committed until the produce is knowingly mislabelled.

But, where this type of fraud is involved, the EU paper-based food control regime is clearly not up to the task. The Single Market is turning out to be a superhighway for fraud, and the systems are manifestly not capable of dealing with it.

Not for nothing have the Norwegians gone to Interpol, rather than Europol, and are now part funding a global crackdown on fisheries crime. Given the similarity, in the nature of the crime, with the horsemeat scam, they maybe need to be covering a wider range of products. Fraudsters are not particular about their choice of food – just whether there is money to be made.

There can be no doubt, though, that this has to be tackled at a global as well as a local level. This is beyond the means of "little Europe".
COMMENT THREAD
Posted by Richard at 22:40