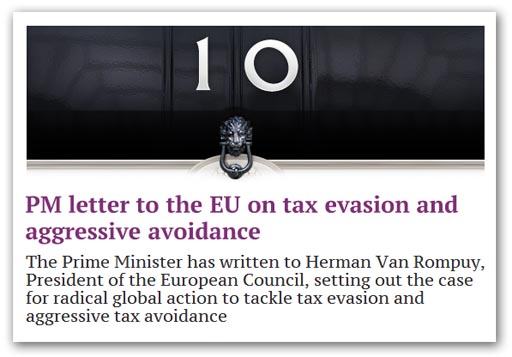 Mr Cameron is the man who, by his own account, seeks to repatriate powers from the European Union, to which effect he wants to negotiate with the "colleagues" at the earliest opportunity.
But, by the same measure, here is a man who was written to Herman Van Rompuy, welcoming his proposals "to discuss tax evasion and fraud at the May European Council".
In so doing, he welcomes "the initiative of the Commission's recent Action Plan on Tax Fraud and Tax Evasion, which sets out a range of proposals on which Europe can show leadership".
This "initiative" was announced in December 2012, in the form of COM(2012) 722 final, making 34 separate proposals for EU action.
We have such things as "an alignment of administrative and criminal sanctions", the use of an EU Tax Identification Number (TIN), reinforced cooperation with EU law enforcement bodies, and a European taxpayer's code – all of which amounts to one of the most significant EU power grabs that we have seen in many a year.
But not only is Mr Cameron buying into this, with a degree of enthusiasm that is by no means universal - with Austria prominent amongst the refusniks. He is also offering to implement controls on our Overseas Territories and Crown Dependencies, to bring them into line with EU expectations.
Thus, with tax fraud and evasion becoming a major new activity for the EU, taking us down the pathto a common European tax system, Mr Cameron is substantially increasing our involvement in EU affairs.
Here then, we have a man speaking with a forked tongue. On the one hand, he says he wants a "managed retreat" from the EU while, on the other, he is second to none in enthusiasm to see the EU take on more powers. As always with politicians, therefore, we need to judge them by what they do, rather than by what they say – although the gushing sentiment from Mr Cameron tells its own story.
The UK, he says, looks forward to continuing to work with all Member States and the European Commission on this hugely important agenda and to addressing these global issues with global solutions.
He is confident, he adds, "that the upcoming European Council and the G8 Summit will be remembered as the turning point in the battle against tax evasion and avoidance and the restoration of confidence in the fairness and effectiveness of our tax systems".
Does this really sound like a man who is committed to reducing the role of the EU in UK affairs? I thought not.
COMMENT THREAD
Posted by Richard at 19:27