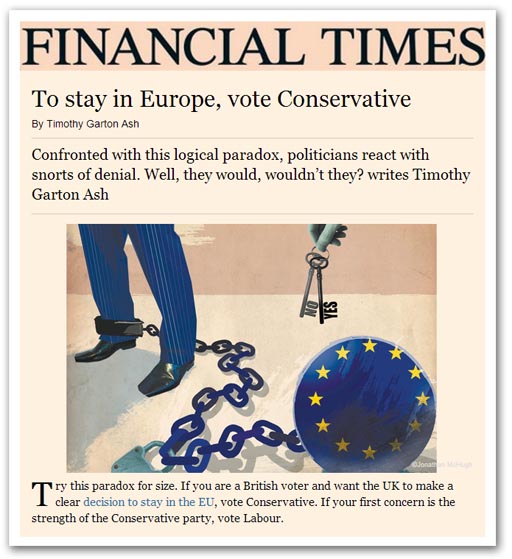 Timothy Garton Ash in the Financial Times has been doing some ruminating about referendums and the Conservative Party. And to cut a long story short – the bigger the cut the better in the case of Garton Ash – he argues that the most certain way of staying in the EU is to vote Conservative.

His reasoning is that, sooner or later, there will be a new EU-wide treaty, with further powers transferred to Brussels, which will trigger the "referendum lock" in the UK.

With a Labour/Lib-Dem coalition in place (a likely outcome at the next election), he thinks that a Conservative party under a new leader urging a "no" vote, backed by UKIP and a mainly eurosceptic press, would prevail. A Labour-led government probably could not reassure enough of a class of voters called the "worried nationalists" to enable it to win a "yes" vote during the next parliament.

On the other hand, a Conservative-led government in power would go through the motions of renegotiation. Small successes could be wrapped up in big, colourful boxes for presentation to voters and Mr Cameron would then have support of the two main opposition parties and much of British business.

Thus, even while his own party might split, and UKIP would – of course – be against him, under Mr Cameron and the Conservatives, a "yes" vote would be more likely. Only the Tories could reassure the "worried nationalists".

However, Garton Ash is basing his assumptions on a referendum being held in the next parliament. If a referendum was delayed beyond 2020, a different situation would pertain.

For a start, in 2015, a defeated Conservative party would almost certainly dispense with Mr Cameron and could well select a robustly anti-EU leader. Come the election in 2020, a Conservative victory might still have that leader supporting a "no" vote in a referendum.

But a Tory defeat in 2020 could mean the party – according to the Garton Ash recipe – also supporting a "no" vote in any referendum held during the 2020-5 term. And in both cases, in or out of power, the Tory-led "no" campaign would win.

On this basis, it would seem that the best option for leaving the EU is to vote for Labour at the next election. Then, if a referendum is delayed until after 2020, either Labour or the Tories will do. It becomes a win-win for the "no" vote.

And while that might be speculation, there is certainly less uncertainty in the post-2015 term. A Conservative Party in power, with the support of campaigns such as Business for Britain, would most certainly go for the "yes" vote. Thus, if a vote for UKIP at the next election is likely to let in Labour, some might argue that this might be the best way of securing an EU-free nation.